Evolutionary conservativeness and diversification of cycads: Understanding the evolution of living fossils 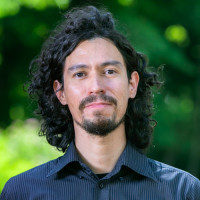 The cycads are a lineage of gymnosperms that represent an example of biological stasis success. Despite their early origin in the seed plant evolution, they survived multiple events of mass extinction and could diversify in modern tropical ecosystems during the Cenozoic, especially in countries known for their great biodiversity such as Mexico. What factors have allowed their persistence and diversification despite their conservative nature? I have studied the cycad genus Dioon, a group of 17 species occurring in habitats ranging from tropical forests to arid zones in Mexico and Honduras. Phylogenetic and phylogeographic analyses revealed that the diversification of Dioon has been driven by the long-term process of aridification of Mexico since the Miocene. The lineages that shifted from mesic forests to arid zones show leaf trait variations beneficial against water stress; this feature can be also observed at the inter-population level when comparing mesic versus arid sister pairs. What mechanism allows this aridification-driven diversification? Using population genetics and ecological niche modeling on sister lineage pairs, I have revealed that lineages at arid zones might tolerate arid environments, but within the arid habitat, they retain the same ancestral niche also observed on their mesic sisters. The surrounding areas that are suboptimal for their niches serve as barriers against gene flow: this promotes allopatric speciation. This research has revealed that the mechanism that allows the diversification process in Dioon involves three factors: 1) a habitat shift due to aridification, 2) niche conservatism that facilitates geographic isolation, 3) gaining unique morphological and anatomical features that help to counteract water stress, probably through long-term stabilizing selection. This research highlights the importance of biological conservatism in evolution, and how “living fossils” can still diversify into modern ecosystems.