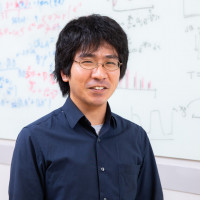 Nonlinear oscillatory phenomena often emerge in various systems, for example circadian rhythms in biological systems and acoustic vibrations in engineering. Analysis and control of these oscillatory phenomena are one of the big problems in science and technology. My main research field is biological oscillations, especially circadian clocks. The circadian clocks are based on gene-activity rhythms with approximately 24-hour period, and its temporal waveforms are of various shapes. Recently, we theoretically showed that the period of circadian clocks is proportional to the waveform distortion from sinusoidal waves. Interestingly, we found the waveform is important for periods not only in biological oscillations but also in several other types of nonlinear oscillator models.