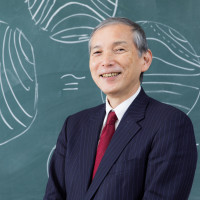 I will talk about several attempts to understand infinite groups.

The group structure appears almost everywhere in mathematics. Groups describe the symmetry of mathematical objects. A discrete group is a space with usually countably many points which is not an interesting topological space. But people began distinguishing shapes of different groups. For example, the free group on two generators and the free abelian group of rank two should have different shapes. One may think that the shape of the free group on two generators is infinite four valent tree while the shape of the free abelian group of rank two is the lattice on the Euclidean plane. The idea of geometric group theory has been developed to describe the properties of discrete groups. For a finitely presented group, Gromov defined the hyperbolicity of it by looking at its Cayley graph and showed that the hyperbolic groups have many nice properties and it looks like free groups.

When we need to investigate groups, first we may look at its abelianization, and then, for example, we may look at its nilpotent approximation. If its abelianization is the trivial group, however, then we should find another way. In this case, we have the commutator length function on the group. Bavard established the notion of stable commutator length and relate it to the space of homogeneous quasimorphisms. We can also look at the conjugation invariant norms.

There are many interesting infinite simple groups with unbounded commutator length functions, and it would be very interesting to find new methods to describe their shapes.