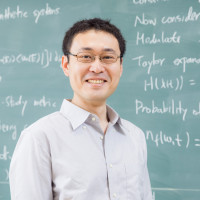 Localization has been one of the main topics of interest in condensed matter physics for more than half a century. Study of localizatoin has recently been entering into a new stage because of the developments in the concept of many-body localization, and also of the recent advances in the technology of quantum-engineered systems such as ultracold atoms and trapped ions. In this paper, we propose a novel method to quantitatively study localization of a quantum state in the platform of quantum-engineered systems. Our proposal makes use of the fluctuation-dissipation theorem; we consider periodically modulating the quantum system and observing the exciation rate. We find that the localization of a quantum state is related to the integral of the excitation rate over the modulation frequency. Our proposal to probe localization does not require high resolutino microscopes to spatially resolve the quantum state. We apply our method to various examples which are of direct experimental relevance in ultracold atoms. Moreover, inspired by a relation between quantum fluctuations and the quantum metric, we describe how our scheme can be generalized to extract the full quantum-geometric tensor of many-body systems. The figure (left) shows how the wavefunction of two interacting particles in a harmonic trap spreads as one increases the interaction, and the figure (right) shows how such spreading can be probed through excitation rate measurements for various values of the interaction strengths.