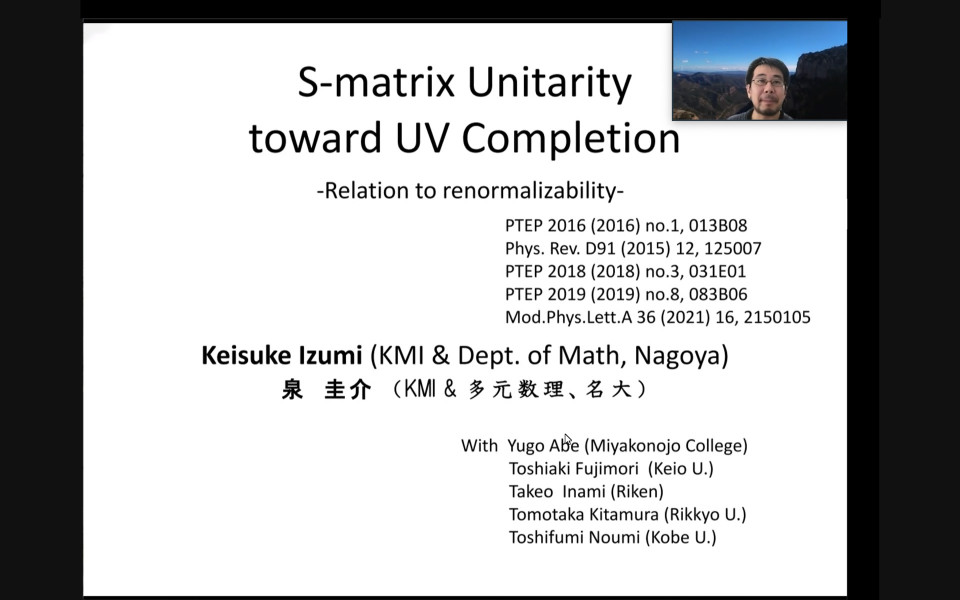 At the seminar organized by the iTHEMS-physics study group, Prof. Keisuke Izumi discussed the S-matrix unitarity toward UV completion. Einstein gravity is not renormalizable and does not hold perturbative unitarity at high energy. This is the main reason why the construction of quantum gravity is difficult. A conjecture was proposed by Llewellyn Smith, "renormalizablility and tree-unitarity at high energy give the same conditions". This conjecture would be important because it shows that, if a theory is constructed such that unitarity is satisfied, renormalizablility holds automatically, and vice versa.

Unfortunately, a counterexample was pointed out. If a theory involves higher derivatives, there exists a theory which is renormalizable but does not satisfy tree-unitarity. A candidate of quantum gravity, the quadratic gravity (R_{\mu\nu}^2 gravity), is one of the examples. Therefore, Llewellyn Smith's conjecture would not be useful for the discussion of quantum gravity. Then, Prof. Izumi and his collaborators introduced a new conjecture, "renormalizablility and S-matrix unitarity (or often called pseudo-unitarity) at high energy give the same conditions".

In his talk, Prof. Izumi explained Llewellyn Smith's conjecture and his contribution to it. Then, he introduced his new conjecture. Finally, he showed that his conjecture works well even in theories with higher derivatives.