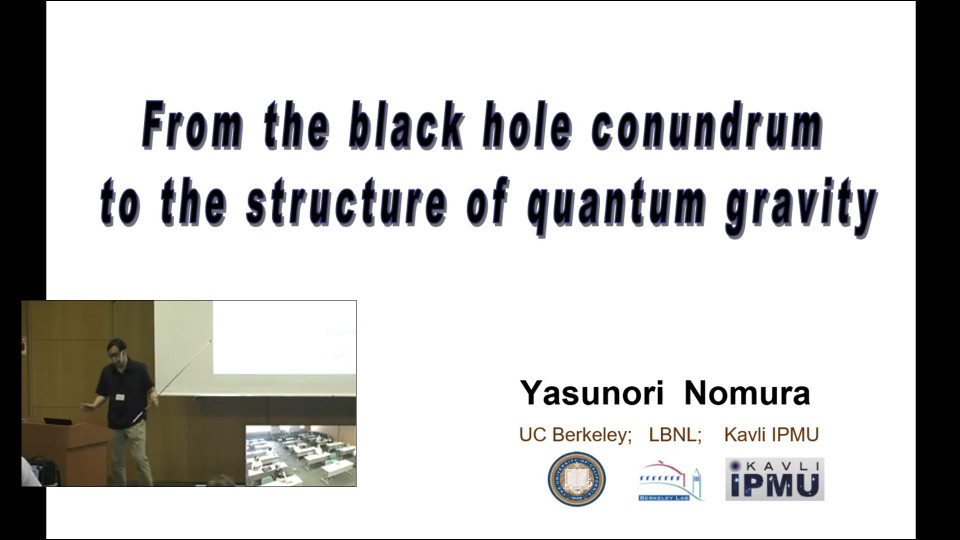 Prof. Yasunori Nomura, the director of the Berkeley Center for Theoretical Physics, the University of California, Berkeley, visited iTHEMS and gave a colloquium entitled “From the Black Hole Conundrum to the Structure of Quantum Gravity” on July 26th. Prof. Nomura started the colloquium by explaining that the two pillars of modern physics, quantum mechanics and general relativity are actually at odds with each other, but each of them usually governs a different domain of physical phenomena, thus obscuring the incompatibility. The focus of the colloquium lies on one of the areas where both quantum mechanics and general relativity become equally important, namely quantum theory of black holes. Prof. Nomura illustrated how the famous phenomenon of black holes discovered by Stephen Hawking, Hawking radiation leads to so-called information paradox, in which the conservation the probability appears to be violated during the process of the radiation from the horizon. He went on to describe the key ingredients in solving the paradox, which are the concept of holography, the stretched horizon, and AdS/CFT correspondence.

In the latter part of the colloquium, Prof. Nomura pedagogically showed the audience the most recent development in the study of the information paradox. The calculation including the contribution from “wormholes” was shown to reproduce the Page curve implying the recovery of the lost probability. The same calculation was also explained through formalism which was developed by Prof. Nomura himself. He concluded with the message that the study of the black hole conundrum is thus revealing the structure of quantum gravity, which involves with a wide range of various research fields such as high energy physics and astrophysics, quantum information science, and many-body physics.

The colloquium was taken place at the 2F Large Meeting Room of RIBF Building and was attended by a limited number of audience in person due to the wide spreading of COVID-19, but more than eighty people joined through zoom.