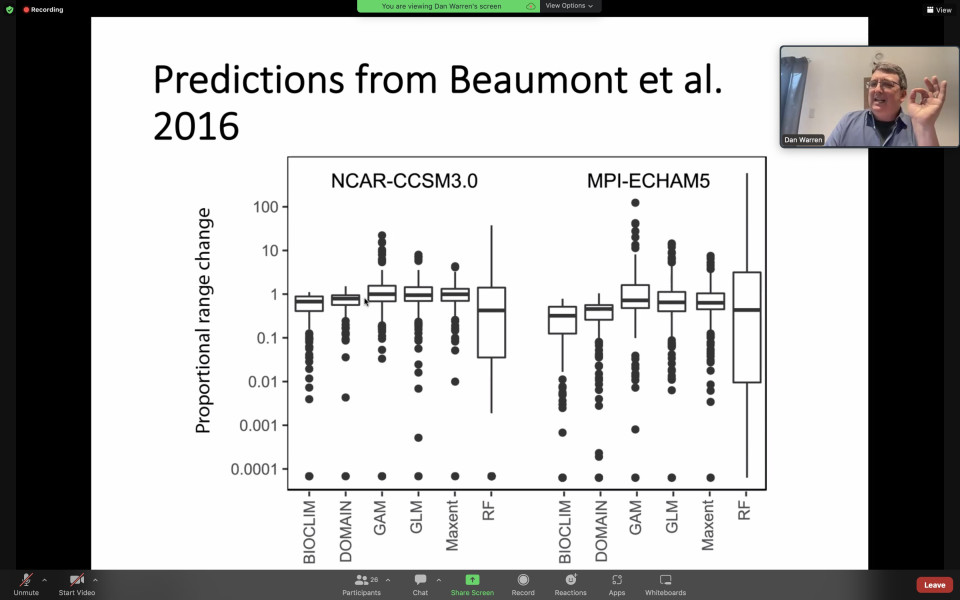 In the Biology Seminar on May 19th, 2022, we had the great opportunity to have Dr. Dan Warren (Okinawa Institute of Science and Technology, Japan) as an invited speaker. In his talk, Dr. Warren explained why the evaluation of species distribution models (SDMs) has become a useful method to understand and predict the geographic distribution of species. In particular, they provide vital information to take measurements in the conservation of biodiversity. To construct SDMs, researchers in this field have taken advantage of publicity available geographic and environmental big data. Usually, those kind of data were not produced with the intention to use it in ecology, but ecologists have developed many methods to use the big data to answer questions in ecology and evolutionary biology. However, despite that several of those methods have become standard in ecology, Dr. Warren warns us that all commonly used methods have serious biases, and such biases might be related to how much we unquestionably rely that big data. To explain his point, he showed the results of one paper that he and his colleagues recently published. In that paper, the authors used occurrence data of a fictional animal: the Pokémon Kangaskhan (name in English) or ガルーラ (in Japanese), and followed the usual methods to construct SDMs in order to predict the Pokémon distribution in the Australian territory. They found that the distribution of the fictional animal has strong biases, and that same patterns of biases are also present in many other real-life species. Dr. Warren concluded that there is a big open field to improve methods to construct SDMs. The incorporation of prior information in the construction of SDMs, and the application of Markov chain Monte Carlo methods to account for the uncertainty of results might be effective solutions to solve the problems that persist in this research field.