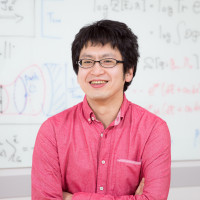 Although we know "all things are in a state of flux. (Patna rhei.)", it has been still an interesting question whether we have "universal" features in such time-evolution of all things. Considering the non-equilibrium open systems like the Brownian particles, we have tackled this problem from the point of view of time-translational symmetry. We regard the transient diffusive (or time-oscillating) behaviors as "symmetry-broken phases of matter", and develop a way to describe their spacetime evolution. Our formalism is based on the so-called effective field theory (EFT) originally developed in the context of particle physics and now used in almost every branches of physics. The advantage of the EFT is that it enables us to capture the possible universal properties in the large-scale (low-energy) behaviors of systems. As a result, we find the existence of the Nambu-Goldstone-like mode during transient time-evolution, which gives the universal diffusive behaviors of all things in a state of flux.