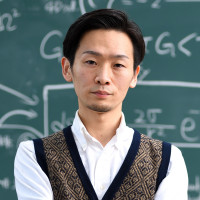 What's going on inside black holes? The observations to date have taught us the nature of black holes outside and around it, but it does not tell us anything about the inside yet. This is because black holes are "almost" black: gravity is so strong that physical signals from the inside "almost" never come out. So, how can we search for the interior of black holes? It is necessary to return to the basic principles of physics and reconsider what a black hole is. In this paper, we succeeded in describing the inside of black holes based on general relativity and quantum mechanics (quantum field theory). What is important here is a fact that black holes evaporate: According to quantum mechanics, black holes emit weak light, slowly lose energy, and eventually evaporate (Hawking radiation). By taking in this effect from the beginning and analyzing the collapsing process of stars, we obtained the following result: The black hole is a compact object with a surface (instead of horizon) that looks like a conventional black hole from the outside and eventually evaporates without a singularity. (See figure.) Indeed, we explained why this picture can be achieved in quantum field theory. In addition, we investigated how much information is contained inside and showed that the amount (entropy) is given by the surface area. We also described how the energy decreases. This work provides the first field-theoretical formulation of the black hole, and I think it will be the basis for investigating how the information that enters the black hole will go out.