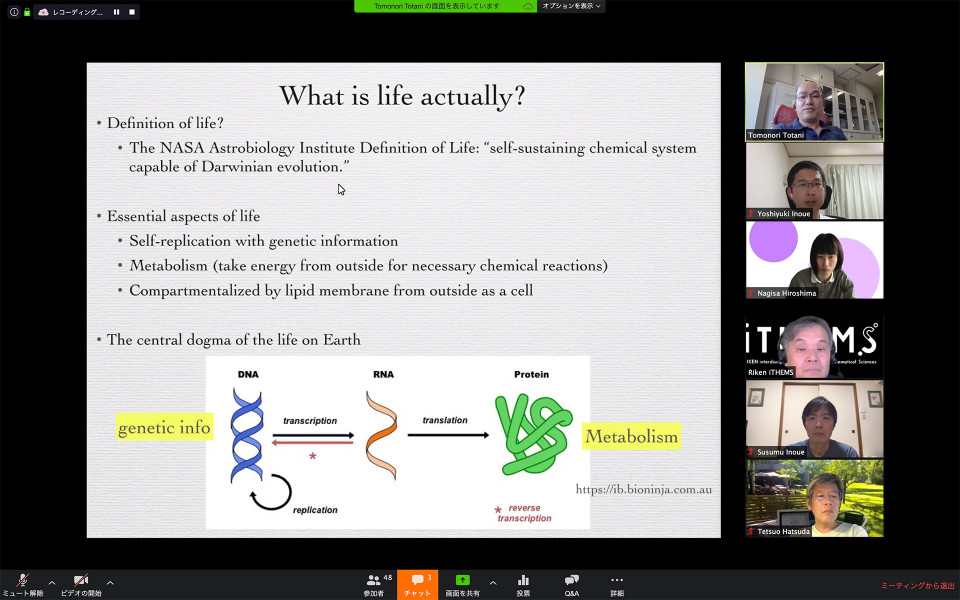 Abiogenesis is the natural process by which life has arisen from non-living matter. Understanding of abiogenesis can tell us one of the most fundamental questions in natural science: “Why are we here?”. However, abiogenesis probability is believed very very low to have us, life, in the universe considering the formation of a long enough polymer having a correct nucleotide sequence by random reactions. Sometimes, this probability is quoted as “Can a monkey hitting a keyboard at random type a complete work of Shakespeare?”. On 11 May 2020, we had iTHEMS Colloquium inviting Prof. Tomonori Totani from the University of Tokyo, with the title of “Emergence of life in an inflationary universe.” Prof. Totani is a renowned professor in astrophysics working on high energy astrophysics and cosmology. As a cosmologist, he visited this abiogenesis issue. Cosmologists believe that the universe created by inflation should extend far beyond the observable universe (13.8 billion light-year radius). Combining the knowledge of this inflationary universe and the RNA formation processes, he provided a new equation describing the abiogenesis probability in an inflationary universe. This new equation showed that, as the inflationary universe contains a large number of stars, it may provide sufficiently many abiogenesis events, even if we consider only the basic random polymerization. However, following his equation, regrettably, we may expect no “aliens” in our universe. Let’s see the results of future telescopes’ search of a second Earth.