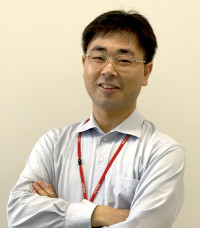 On Sep. 2 and 3, Dr. Hirotaka Irie (DENSO Corporation / iTHEMS visiting scientist; see his self-introduction in this volume of NewsLetter) gave a series of comprehensive lectures on "Quantum Annealing" which is a quantum computational scheme for hard optimization problems. This was held as a part of the iTHEMS QCoIn WG activity.

In the first day, he started the lecture by explaining the fundamental notions of quantum computation and quantum annealing, followed by the basic usage of quantum annealer.
In the second day, he discussed the notion of computational complexity in detail, and then showed various examples of the real-world applications of quantum annealer.
The lectures were given only by using white-board with detailed explanation of basic equations, which stimulated lots of questions from the audience. Discussions continued during the break and after the lectures.