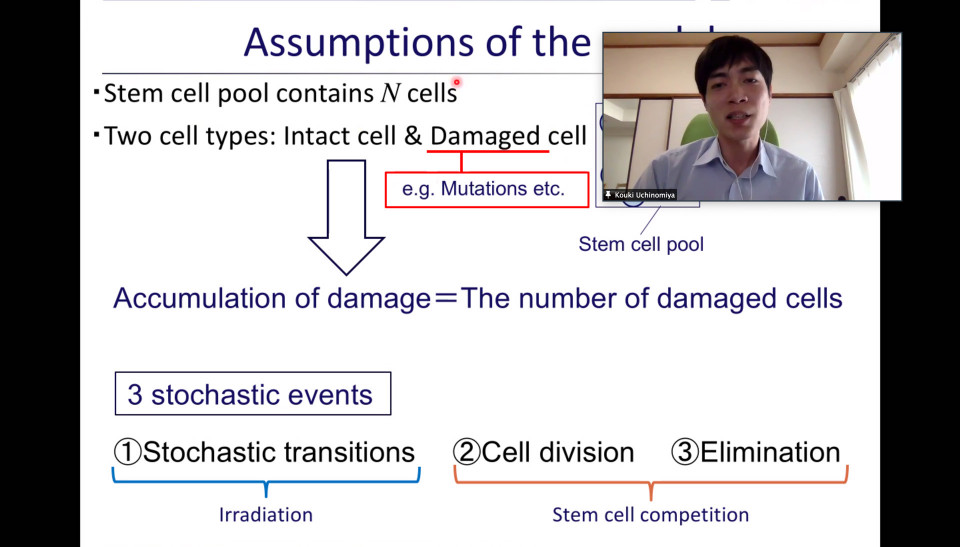 On May 27 (JST), we had online talk by Dr. Kouki Uchinomiya at iTHEMS Biology Seminar. He was one of active members of RIKEN iTHES, and currently he is at Central Research Institute of Electric Power Industry in Tokyo. This time, Kouki talked about radiation and cancer risk.
Radiation can cause DNA damage for which it can cause cancer in our body. In the field of radiation and cancer, there has been a mystery that cancer risk decreases as the dose rate of radiation (Gy/h) decreases while the total dose of radiation fixed. By incorporating the competition between the normal and the damaged cells by radiation into a simple mathematical model, he successfully explained the mysterious phenomena. His model revealed that the key parameters including a relative reproductive ability of the damaged cells determine the cancer risk. According to him, those parameters will be experimentally measured in the near future, and we understand that the model should contribute to the quantitative estimation of cancer risk by radiation.
During and after the talk, there were stimulating discussions as for the philosophy behind his very simple model and a possible extension to the model with the effect of immune system. We enjoyed his concise talk very much. Thanks Kouki!