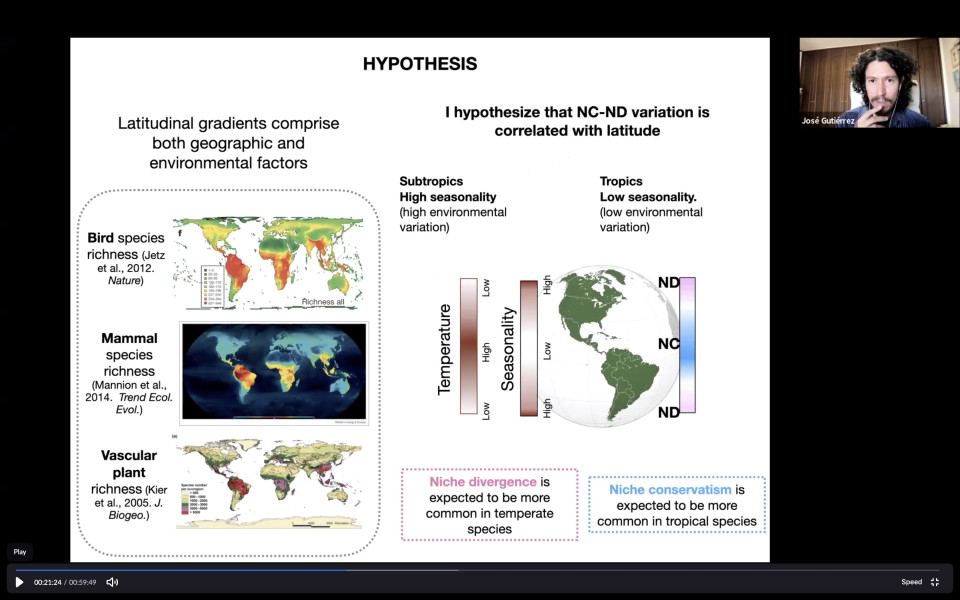 In this talk, I mentioned how both geographic isolation and natural selection may influence the way how species can be originated. I made emphasis in a general pattern that suggests that tropical species are more likely than high-latitude species to evolve while retaining the niche of their ancestors; a process called “niche conservatism”. To demonstrate this pattern, I showed the recent results of my own empirical research on the cycad genus Ceratozamia from Mexico: species at lower latitudes evolved niches less differentiated than expected from a Brownian Motion model (an evidence of niche conservatism), and high-latitude species evolved niches more differentiated than expected (an evidence of niche divergence). I hypothesize that both “niche conservatism” and “niche divergence” are not opposed processes as usually thought in ecology, but are part of a same general process. The implementation of models to predict how phylogenetic and ecological factors interplay in the formation of species along the latitudinal gradient may explain the pattern at the global level. The discussion on this topic allowed identifying that the latitude-associated variation of biodiversity richness seems to be analogous to thermodynamic models: a higher energy availability in the tropics will make biological groups to evolve different ways (species) to exploit that energy.