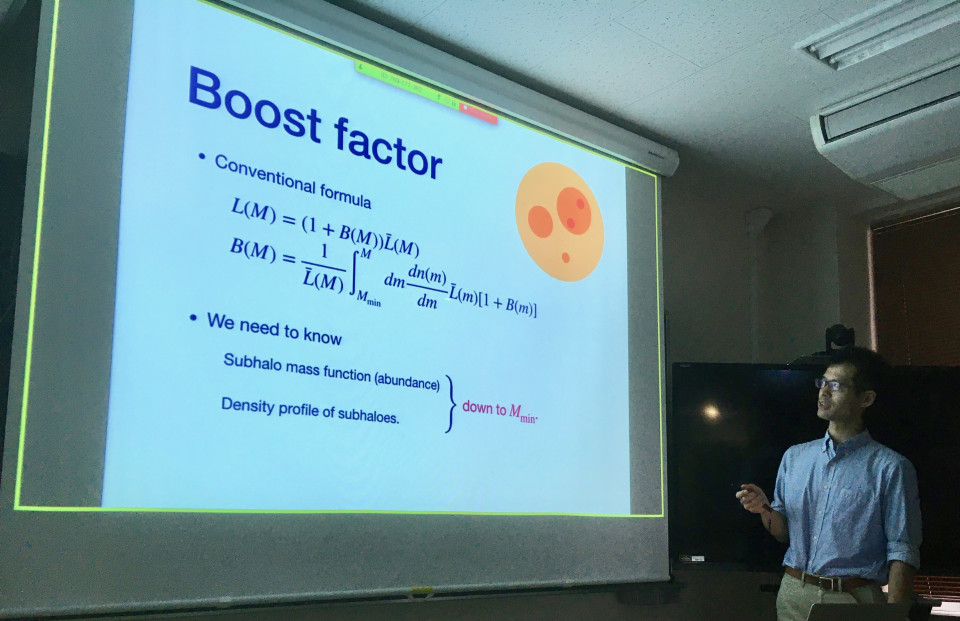 The 2nd DMWG seminar was held on Oct.21, inviting Dr. Sekiguchi from The Univ. of Tokyo/KEK. Focusing on the weakly interacting massive particle (WIMP) case, he lectured the formation of the minimum mass DM halo in the early Universe and its implications.

WIMP is one of the strongest candidates for DM. From a theoretical point of view, neutral wino in the split-SUSY scenario is an example. One important feature of WIMP is that it achieves the current DM density, usually referred to as the relic abundance, via the so-called freeze-out mechanism. In the early Universe, the thermal equilibrium between WIMPs and the standard model (SM) particles is maintained. As the Universe expands, the temperature decreases then the WIMP annihilation rate to the SM particles becomes smaller than the expansion rate of the Universe. At this point, the number density of DM is fixed. This is the thermal freeze-out mechanism to determine the DM relic density. However, the WIMP and the SM particle are still kinetically coupled even after the thermal freeze-out. In this stage, they transfer momentum by each other through the direct scattering. By carefully calculate the epoch of the kinetic decoupling, the minimum halo mass, which is important in characterizing the DM halo properties and the observable signatures, are determined. He showed that the minimum halo mass should be of the order of O(1e-7) solar mass when we consider the neutral wino in the split SUSY scenario. This value is smaller than that expected when we neglect the kinetic decoupling effect. Furthermore, the total number of small-scale halos resides in the larger halo increases. The enhancement in the number of small-scale halos leads to a higher flux for gamma-ray annihilations in present-day halos. We have an increased possibility of detecting DM signatures in the on-going and planned astrophysical observations.

Haloes at the low-mass end in wino dark matter