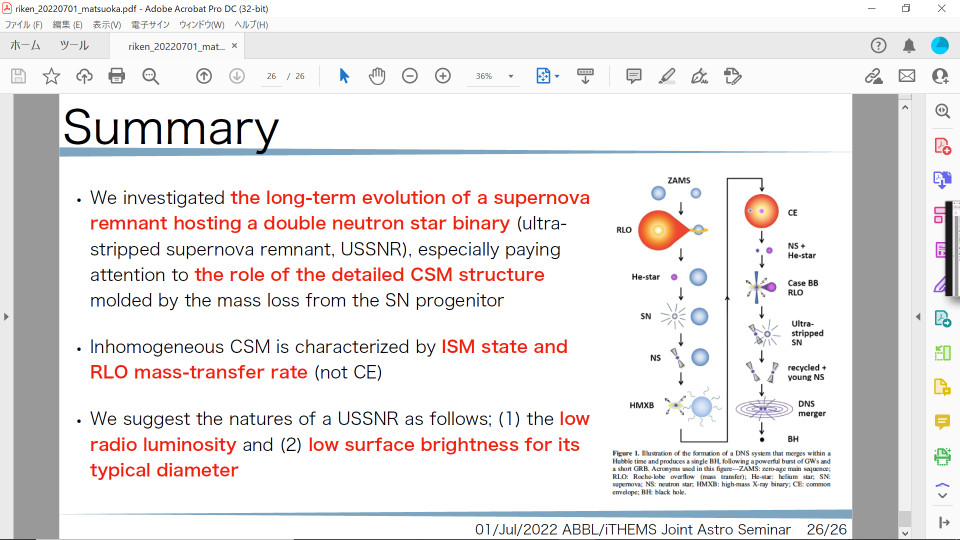 Mr. Tomoki Matsuoka gave an excellent talk on the long-term evolution of a supernova remnant hosting a double neutron star binary.
He presented that stellar mass loss is one of the crucial elements determining the fate of core-collapse supernovae progenitors (SNe). Since the material released from the progenitor will be distributed as circumstellar medium (CSM), it can also influence the subsequent evolution of the SN or supernova remnant (SNR). Despite its importance, mass loss histories predicted by stellar evolution models have not been incorporated with modeling for SNRs. As a first step, he investigated the dynamical evolution of an ultra-stripped supernova remnant (USSNR), which originated from a core-collapse SN explosion proposed to be a candidate formation site of a double neutron star binary. By accounting for the mass-loss history of the progenitor binary using a model developed by a previous study, he constructed the large-scale structure of the CSM up to a radius ∼100 pc. Then, he simulated the explosion and subsequent evolution of a USSN surrounded by such a CSM environment. He found that the CSM encompasses a vast region characterized by a hot plasma with a temperature ∼10^8 K located around the termination shock of the wind from the progenitor binary (∼10 pc), and the USSNR blast wave is drastically weakened while penetrating through this hot plasma. Radio continuum emission from a young USSNR is sufficiently bright to be detectable if it inhabits our galaxy but faint compared to the observed Galactic SNRs. In this seminar, he talked about the background of the connection between the models for stellar evolution and SNRs, the details of his methods, and future prospects very well.