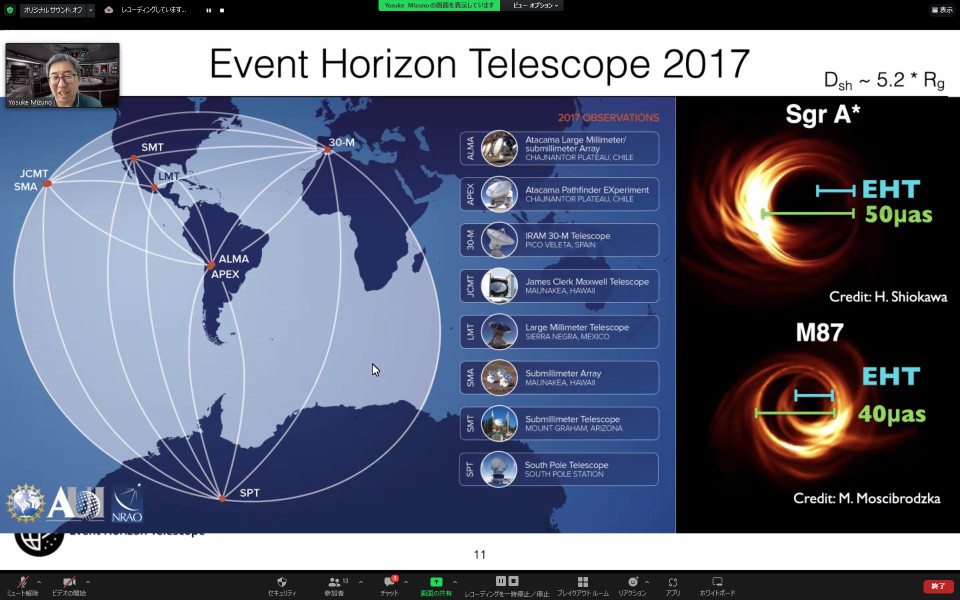 Dr. Yosuke Mizuno presented the first Event Horizon Telescope (EHT) observations of Sagittarius A* (Sgr A*), the Galactic center source associated with a supermassive black hole. These observations were conducted in 2017 using a global interferometric array of eight telescopes operating at a wavelength 1.3 mm. A variety of imaging and modeling analyses all support an image that is dominated by a bright, thick ring with a diameter of ~50 micro-arcsecond. Using a large suite of numerical simulations, The EHT group demonstrated that the EHT images of Sgr A* are consistent with the expected appearance of a Kerr black hole with mass ∼4 million solar mass, which is inferred to exist at this location based on previous infrared observations of individual stellar orbits, as well as maser proper-motion studies. Their model comparisons disfavor scenarios where the black hole is viewed at high inclination (i > 50 deg), as well as non-spinning black holes and those with retrograde accretion disks. Our results provide direct evidence for the presence of a supermassive black hole at the center of the Milky Way. In the seminar, Dr. Yosuke Mizuno focused on more theoretical interpretation and model comparison to understand the accretion flow properties nearby Sgr A*.