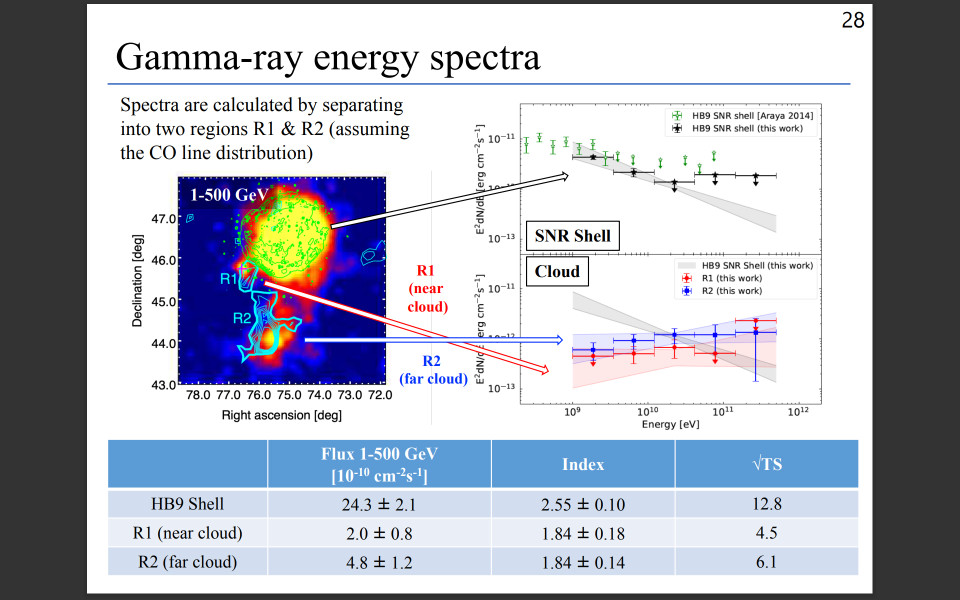 Supernova remnants (SNRs) are believed to be the site of cosmic ray acceleration up to PeV (called PeVatron), but there is no conclusive observational evidence. The possible reason is that only young SNRs (t_age < 1 kyr) can accelerate CRs up to PeV, and then the particles escape at the early stage, thus, the opportunity to observe them is limited. To investigate this scenario, Oka-san and his collaborators observed and analyzed the following two SNRs. First, they focused on SNR G106.3+2.7, the most promising SNR as a PeVatron, since 100 TeV gamma rays have been detected with air shower experiments. With the gamma-ray observation results, they discussed the origin of the PeV CR in the vicinity of this middle-aged SNR (t_age = 5-10 kyr) and then obtained the following interpretation: CRs accelerated at the SNR in the past are illuminating the molecular cloud and producing gamma rays at present. Second, they analyzed the observation data around SNR HB9 and newly found gamma-ray emissions outside the SNR shell at the molecular cloud region. The gamma-ray emission can be explained by the protons accelerated and escaped from the SNR in the past. Therefore, they have attempted to measure the time evolution of the maximum acceleration energy at the SNR by comparing the gamma-ray spectra at the SNR shell and cloud regions. In this seminar, Oka-san reported the analysis results of those two SNRs. Following the seminar talk, we discussed about the SNRs and high-energy gamma-rays from them.