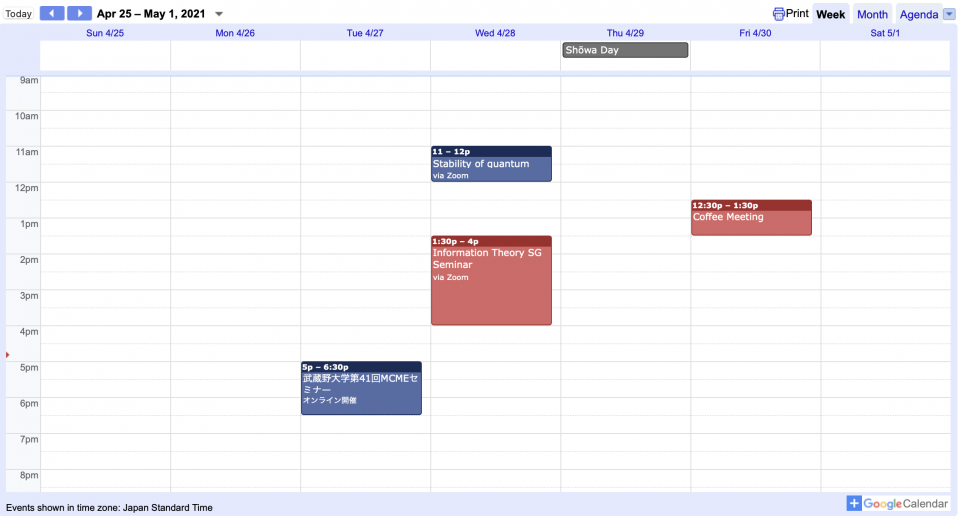 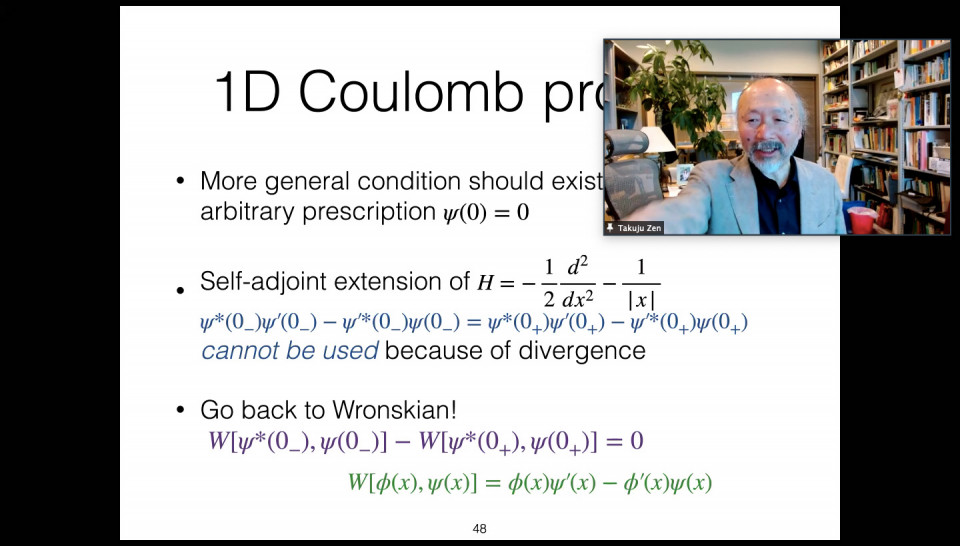 In the first part, he briefly explained the necessity of self-adjointness of operators in quantum mechanics and gave some important examples of such operators. Besides, he mentioned that the self-adjointness of Laplacian is equivalent to flux conservation in one dimension. Finally, he introduced studies of quantum particles on graphs. 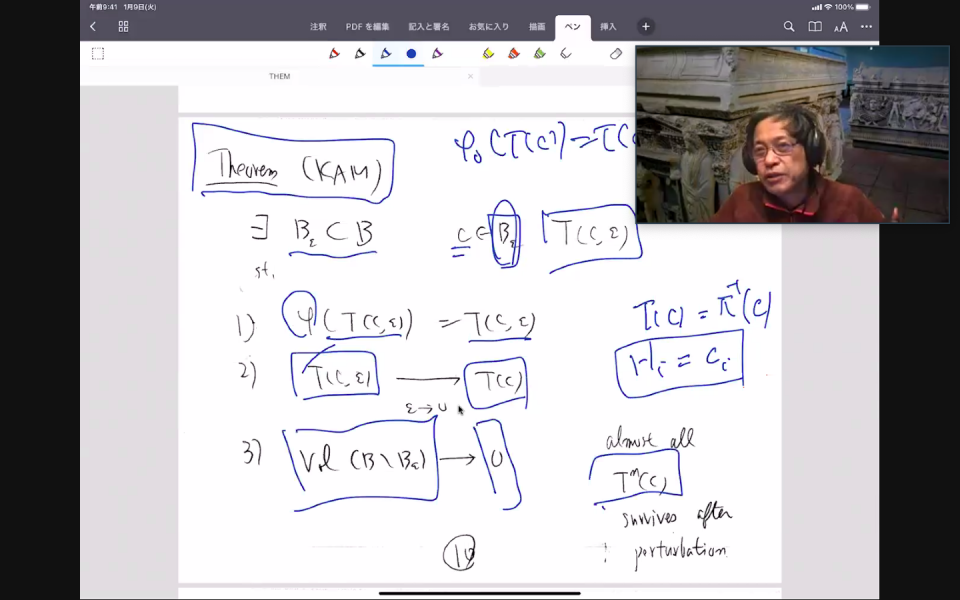 On April 16, 2021, 13:30-15:00 (JST) 0:30-2:00(EDT), Professor Kenji Fukaya, Simons Center for Geometry and Physics, Stony Brook University, gave a colloquium talk by zoom. The title was "Mirror symmetry and KAM theory". His talk began at the origin of symplectic geometry, namely, the Hamiltonian dynamics. He reviewed completely integrable Hamiltonian systems, where the first integrals define foliation by half dimensional Lagrangian tori with linear flows. The KAM (Kolmogorov-Arnold-Moser) theory describes perturbation of this system and shows that almost all tori persist. Then Professor Fukaya explained the Lagrangian torus fibration found by Strominger-Yau-Zaslow, with the example of the complex projective space. For the complex projective n-space, the image of the moment map is an n-simplex and the regular fibers are Lagrangian n-tori. The inverse image of the boundary of the simplex corresponds to the singular fiber of the holomorphic fibration (the product of homogeneous coordinates) to a disk, By choosing a symplectic form, around the singular fiber of holomorphic fibration, there is defined the monodromy map by using the Hamiltonian flow of the Hamiltonian function that is the absolute value of the fibering. Professor Fukaya told that for this example in dim n = 2, the monodromy near the singular fiber exhibits the KAM theoretic behavior, but in dim n = 3, it is not the case with respect to the Fubini-Study symplectic form. However, he expects it can be the case with respect to the Calabi-Yau Kaehler form. This correspondence between symplectic manifolds (the torus fibration of the complex projective space) and complex manifolds (the holomorphic map to the disk) is an introductory example of the mirror symmetry. His talk might enter much deeper part related with homological mirror symmetry, but he stopped and concluded by saying that the KAM theory explains the transition from completely integrable systems to chaos and it should be possible to find alternative in mirror symmetry or field theory which will explain the transition from stable system to chaos. The talk of Professor Fukaya was really stimulating and his enthusiasm impressed the audience. 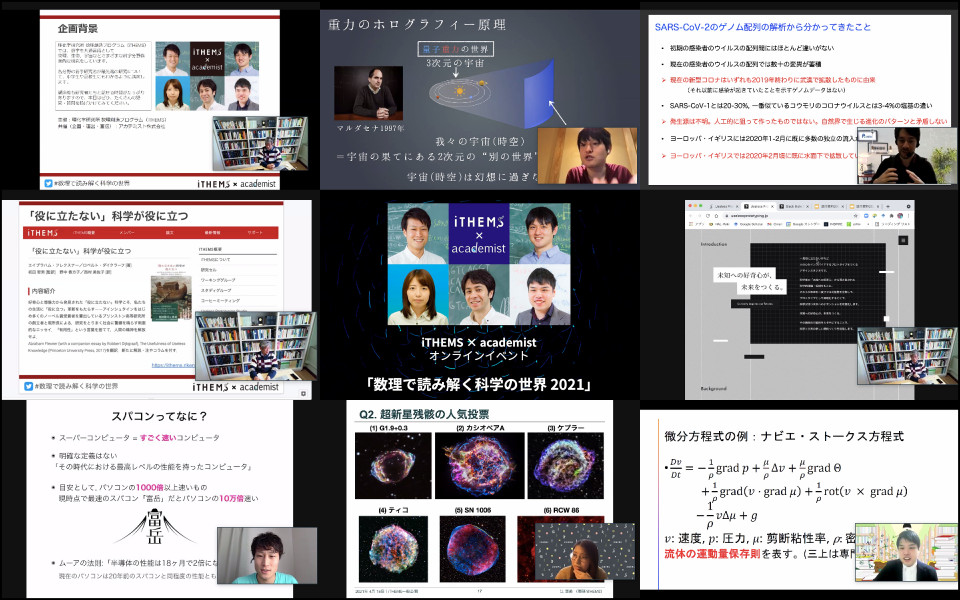 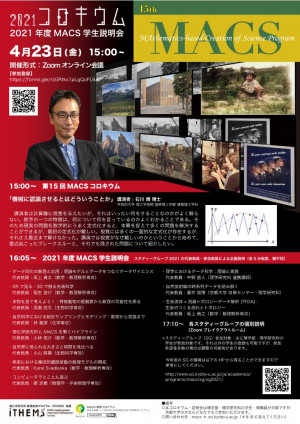 Recent developments in observational technologies open exciting opportunities to map out the detailed structure of the universe. Remarkably, the unique combination of imaging and spectroscopic galaxy surveys is now becoming well established as a standard analysis methodology for precision cosmology. While the former can access directly the underlying clustering of mass dominated by dark matter projected on the sky through the weak gravitational lensing effect, the latter provides us with the three dimensional map of the structure traced by galaxies. One can mitigate the galaxy-bias uncertainty, which has been the major obstacle for cosmology based on galaxy surveys, by jointly analyzing these effects. We still need, however, a robust and versatile theoretical and statistical framework to interpret these datasets. The Dark Quest project, launched in 2015, is a structure formation simulation campaign precisely
for this purpose. We have developed an emulation tool, dubbed as Dark Emulator, based on a large database of simulated dark matter halos in virtual universes with different cosmologies efficiently sampled in six-dimensional parameter space. Dark Emulator employs a simple machine-learning architecture with Gaussian process at its core. It makes predictions of various statistical measures of dark matter halos, both lensing and clustering observables, for a given cosmological parameters in a few seconds on laptop computers without running a new simulation. This AI-aided tool, once supplemented with recipes for the halo-galaxy connection, is therefore applicable to real-data analyses as the theoretical template, which typically requires hundreds of thousands of function calls in the course of parameter inference. I will introduce this project and report the status of its application to Subaru HSC data.
We are looking forward to seeing you online.