The prototypes based on the theories/hypotheses of scientists embody the potential to transform the future. The first trailer "Can the black hole be an information storage in the future?" on the teaser site Published today.

RIKEN iTHEMS will launch the "Useless Prototyping Studio", a project to inspire the human mind with seemingly useless prototypes on Wednesday, December 9. We also publish a project overview and a preview of the first prototype "Can the black hole be an information storage in the future?" on the teaser site, which is available on the same day.

Project Overview
"Useless Prototyping Studio" is a design studio that aims to create new relationships between science and the society by creating prototypes that look useless at first glance but inspire the human mind. Based on scientific theories/hypotheses derived from the "curiosity for the unknown" of scientists, we imagine the possibility of these theories/hypotheses to change the future, and visualize the potential of science for the future by materializing the prototypes. The studio will be led by RIKEN iTHEMS, with the creative boutiques "SCHEMA" and "addict" as initial partners. As the project progresses, the number of partners and participating members will be expanded. 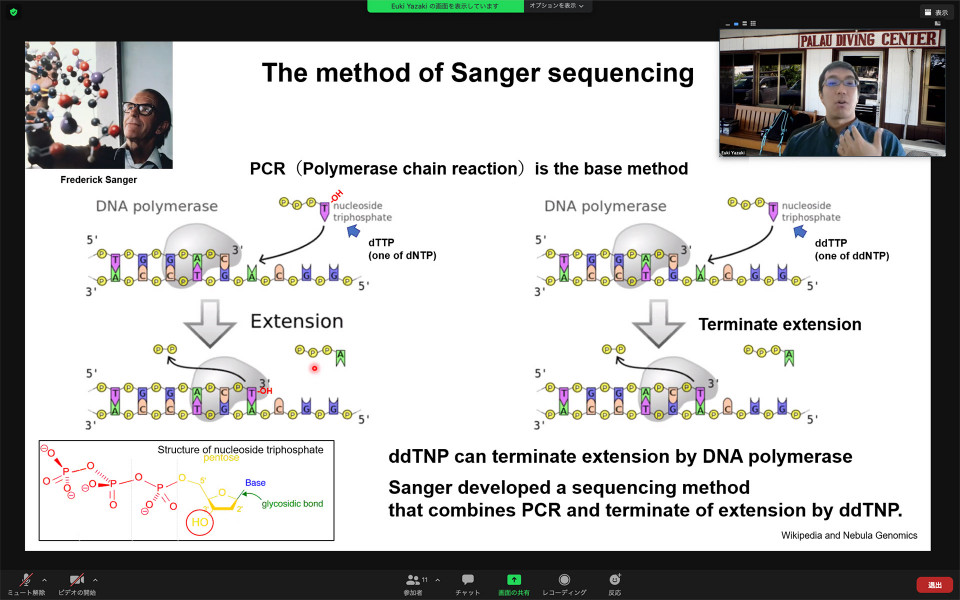 In iTHEMS Biology Seminar on December 10th, Dr. Euki Yazaki (iTHEMS) talked about recent techniques and problems in obtaining the large-scale sequence data of eukaryotes. He first mentioned the importance of identifying and comparing the genome sequence in biology. Then, he illustrated the two representative sequencing methods, Sanger sequencing and next-generation sequencing (NGS). He clearly explained the features of these methods, highlighting the advantages of NGS in exploring large-scale or novel sequences. In the latter part, he introduced a method using the graph theory to reconstruct the large-scale genome data from the fragments of a sequence obtained by NGS. He lastly pointed out some problems in the current reconstruction method, and we discussed possible ideas to mitigate them after the talk. We are grateful to Euki for the stimulating talk! 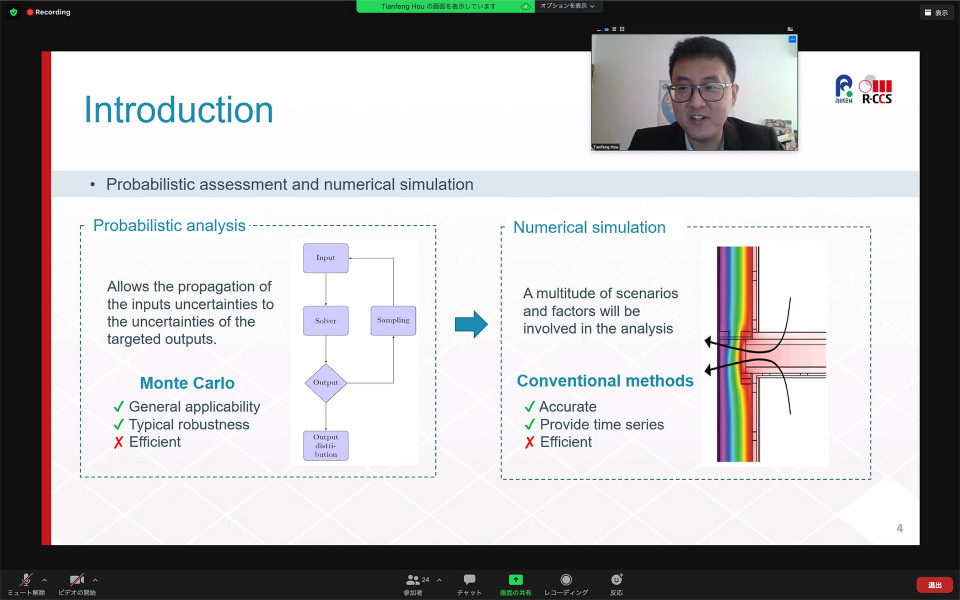 On November 13, Tianfeng Hou, a new member of the team, gave a math seminar on the Monte Carlo study. In the first part, the speaker focuses on quasi-Monte Carlo method and its probabilistic assessments. In the second part, the speaker explained reduced-order models and how they work in the hygrothermal model. He first showed his model works efficiently in the linear scenario. On the other hand, he explained that his model is not so efficient in some nonlinear scenario. 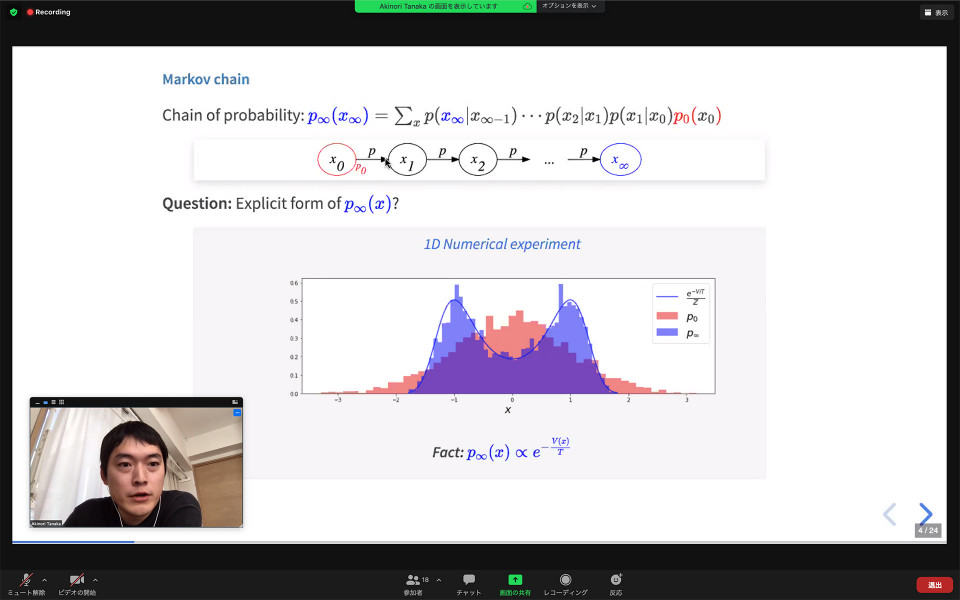 Kicking off the study group of information theory, Akinori Tanaka (Senior Research Scientist of iTHEMS and AIP) talked about the connection between Langevin equation and deep neural networks. He first showed that by analyzing Langevin equations one can derive the second law of thermodynamics which posits that the total entropy of the system should increase. He then delved into stochastic gradient descent (SDG) and showed how to apply it to train the neural network in general. We discussed too enthusiastically for him to finish his talk, and so we'll organize the second part next week (08 December 2020). We are all looking forward to discussing more, and thank you so much for the elegant talk!
-Ryosuke Iritani (iTHEMS) 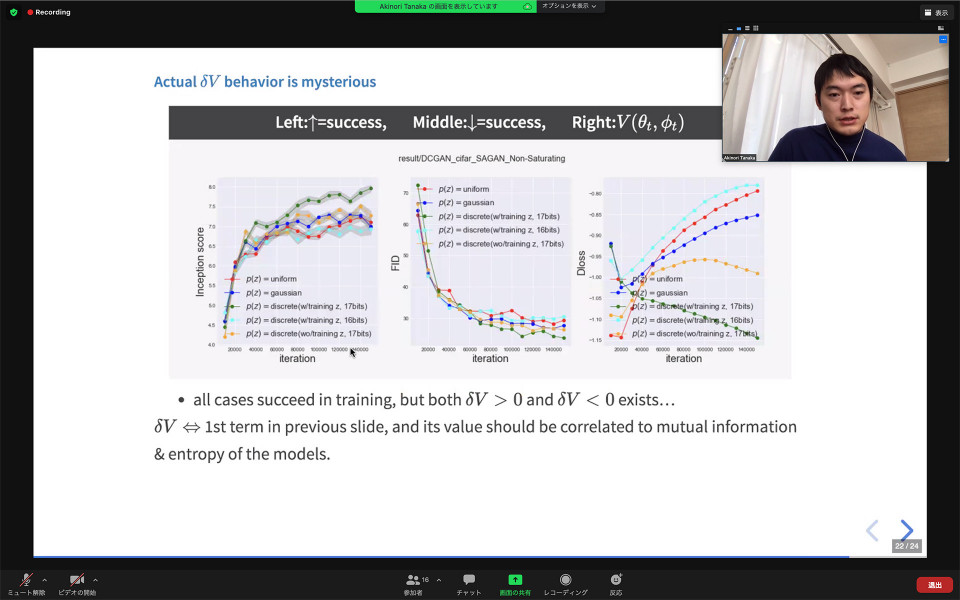 Continued from last week, Dr. Akinori Tanaka (Senior Research Scientist of iTHEMS and AIP) gave us a talk about the connection between the thermodynamic law and the algorithms of deep learning. He first reviewed the second law of thermodynamics in Langevin systems and the representation of stochastic gradient descent algorithms using Gaussian fluctuation. He then explained about Generative Adversarial Networks (GAN), which can be used in producing near realistic fake images. Based on mathematical correspondence, he discussed a possible application of the modified thermodynamic law to the algorithms of GAN. We are thankful to him for the exciting talk! 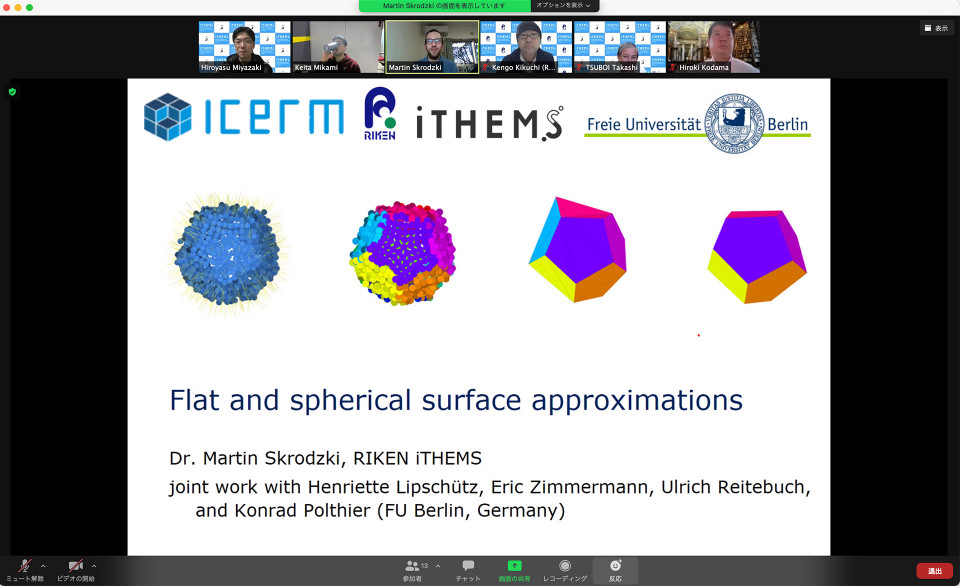 The title of the talk was “Flat and spherical surface approximations”. He talked about two approaches to approximate surfaces by using flat objects and spherical objects.

In the first part, he explained the approximation using flat objects. Naively, there are two approaches to approximate surfaces. One is local and the other is global. In local approach, we need to get extremely many samples. In global approach, it will produce extreme torsion of surfaces. To remedy these problems, we should think of medium approach, i.e., patching of small simple flat objects (like covering of manifolds). This is called Variational Shape Approximation (VSA). The VSA has three steps: seeding, flooding and updating (and we iterate these recursively). This method gives us a very nice approximation of surfaces, but it still has some defects. Indeed, The recursive process does not always converge, the result depends on initial random choice of seeding, and it also depends on the artificial choice of the number of proxies we use. Therefore, Martin and his collaborators refined the VSA, by adding new steps called “splitting”, “Merging” and “Switching”. These steps avoids all defects above.

In the second part, he explained his project on approximating surfaces using spheres. He shows some extreme examples of surfaces which are not relevant for spherical approximation: cone and toilet paper. If you imagine a needle-shaped cone, then its intersection with a ball will be very small. On the other hand, if you thing of rolled paper, then its intersection with a ball have too large area. However, if the surface we want to approximate satisfies a relevant condition, we can obtain a condition on the radius of the ball we use to approximate the surface. During the lecture, he proposed an interesting question on the maximum/minimal area of the intersection of the ball and the surface, and there was an exciting discussion including the audience. 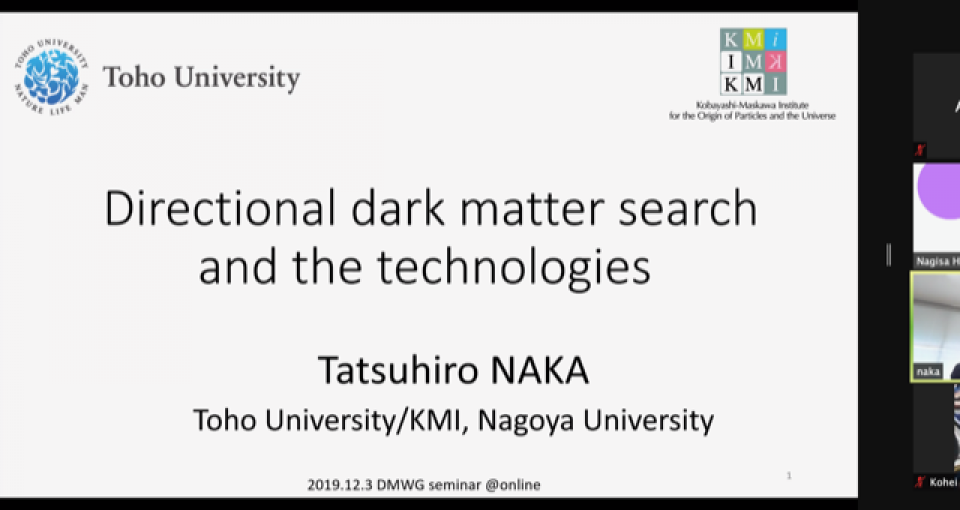 Among the kinds of dark matter (DM) candidates, Weakly Interacting Massive Particle (WIMP) shows a strong model motivation. It achieves the current DM density naturally via the so-called thermal freeze-out mechanism. The strength of the interaction between WIMP and the standard model particles should be finite, and various direct detection experiments have already excluded a large part of the favored parameter space. We are now in the phase to consider the next strategy.

There are several directions to proceed. For example, annual and/or diurnal modulation of the event rate of the DM-nucleon scattering. However, the expected modulation amplitude is so small that a few percent for annual modulation and less than 1% for the diurnal case. Kinds of on-going experiments intensively search the modulation signature now, however, it is still difficult to confirm.

Another possibility is to make use of directional information. One important advantage of the directional search is its power for background rejection. The DM signal should be more frequently found in the direction corresponding to the Galactic Center while the backgrounds are in different directional distributions. These differences enable us to reduce the number of scattering events required for claiming the detection from O(1e4) to O(100), compared to the conventional direct detection cases. Furthermore, it could potentially provide us with information about the velocity distribution function, of which precise understanding is a key to any kinds of direct detection experiments, as well as the scenarios explaining the evolution of our Galaxy.

Hence, the directional search is an attractive idea to probe the nature of DM. Recently, such projects are launched, and still some technical issues to solve remain. We have to achieve the O(1e-9)m scale resolution of the particle track, to confirm the scalability and stability, and to understand the ultra-low background. Many projects are now tackling these problems. The new era for direct DM search now begins! 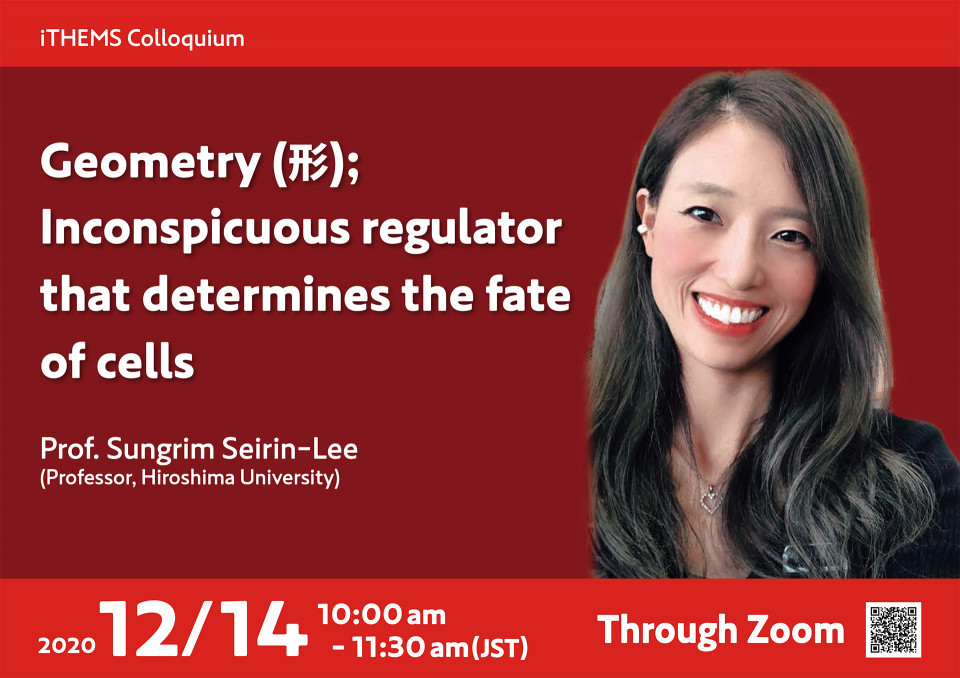 Geometry (形); Inconspicuous regulator that determines the fate of cells

In the history of mathematical study in pattern formation, the effect of domain has been considered as an important factor that can regulate spatial patterning. However, it is still unknown in biology how the geometry of the domain such as nuclear or cellular shapes can directly regulate the cell fate. In this talk, I will introduce two studies of spatial reorganization in chromatin and cellular dynamics and show that the domain is likely to play a critical role in determining the cell function.

M2-brane is an interesting object in M-theory and string theory. A three-dimensional 𝒩=6 super conformal Chern Simons theory with gauge group U(𝑁1)×𝑈(𝑁2), called ABJ theory, describes the low energy behavior of M2-brane On the one hand, it has been considered that when |𝑁1−𝑁2| is larger than the absolute value of Chern Simons level, the supersymmetry is broken. On the other hand, it was predicted that an interesting phenomenon called duality cascade occurs, and supersymmetry is not broken in some cases.

The pathogen with proteins similar to host’s proteins is likely to cause autoimmunity, which is called “molecular mimicry”. To understand the mechanism of autoimmunity development caused by pathogen infection, we considered the following scenario: the infection activates the immune system, which results in clearance of pathogens, and the enhanced immune responses to the host’s body may remain and attack the host’s cells after the pathogen clearance. We developed a mathematical model describing the dynamics of T helper (Th) cells, viruses, self-antigens, and memory T cells and identified the conditions necessary to realize the scenario. We considered the cross-immunity of three different modes of action: [1] virus elimination by Th cells reactive to the self-antigen, [2] activation of Th cells reactive to viruses by self-antigens and Th cells reactive to self-antigens by viruses, and [3] enhancement of immune responses to self-antigens by Th cells reactive to viruses after the infection. The cross-immunity of type [3] was found to be most important for autoimmunity development. In contrast, [1] and [2] suppressed autoimmunity by effectively decreasing the viral abundance. 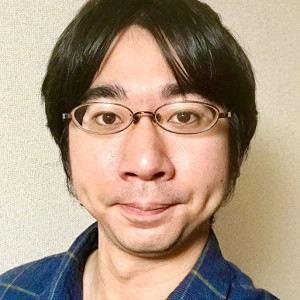 Development of methods for classical statistical mechanics is desired for accurate predictions of the structures and thermodynamic properties of liquids. A powerful framework to describe classical liquids is density functional theory (DFT). In the quantum case, there have been recent attempts to develop accurate methods with combining DFT and the functional renormalization group (FRG), which is another framework to deal with many-body systems utilizing evolution equations, and such approaches are expected to work also in the classical case. In this presentation, I will talk about a new approach for classical liquids aided by FRG. The formalism and some ideas to incorporate higher-order correlation functions to systematically improve the accuracy will be shown. I will also present a numerical demonstration in a one-dimensional exactly solvable system and discuss the results by comparing to other conventional methods such as the hypernetted chain.