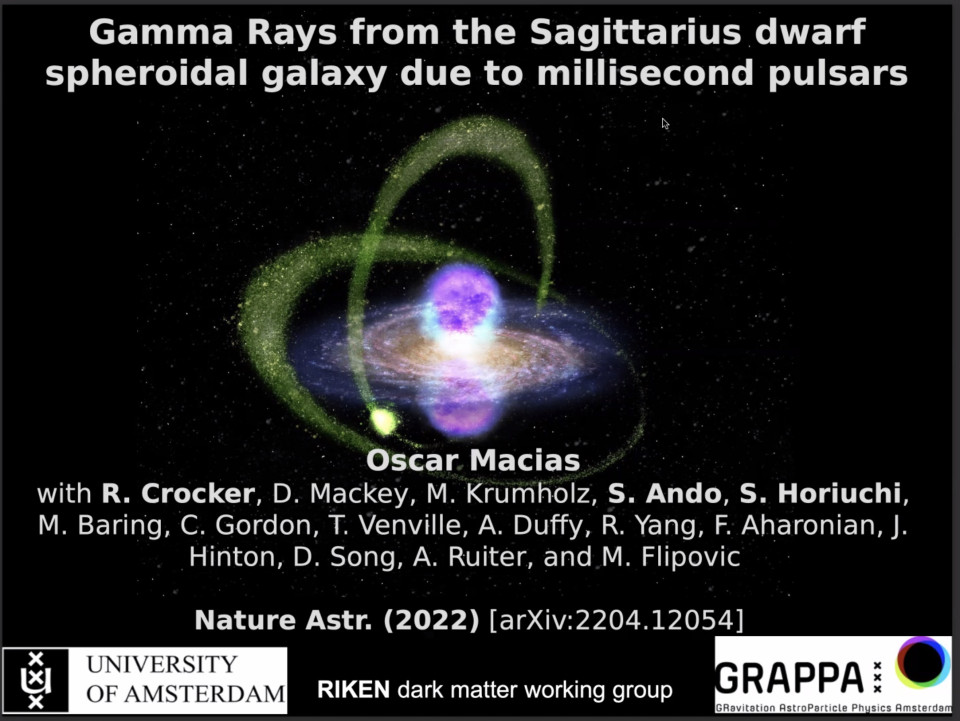 Dark matter (DM) is only a part of the mysterious phenomena in our Universe. As our exploration of the Universe proceeds, we frequently meet new mysteries. The Fermi bubble is such an example. Fermi-LAT founds extended gamma-ray emissions in the vertical direction from the Galactic Center and the origin is still unknown.

Observations in other wavelengths could give some hints about its interpretation. The Saggitarius stellar stream, which is believed to be a dwarf spheroidal galaxy (dSph) being disrupted, seems to overlap with the Fermi Bubble region. Old star populations including milli-second pulsars, which are famous gamma-ray emitters, can be expected in dSphs. However, the spectrum of milli-second pulsars is different from that of the Fermi Bubble and the interpretation cannot be possible in a straightforward way.
Another key ingredient for this consideration is the gas component of the Saggitarius stream. In such environments, inverse Compton emission should contribute to the high-energy regime and gamma-ray emission should be interpreted with two components. The prediction of this two-component model fairly matches the observed properties of the Fermi Bubble.

This fact, at this stage, leads to another hint to DM study.
Currently, one of the tightest constraints of the DM annihilation cross-section is obtained from gamma-ray observations of dSphs. When we consider such investigations, usually it is assumed that astrophysical gamma-rays are subtle enough. However, regarding the fact that the tidally disrupted dSph of Saggitarius emits gamma rays from interactions of baryonic components, we must be careful about the target selection of dSphs for future observations. It is suggested in the talk that the ordering of the promising dSphs for the future gamma-ray search of DM could be different.

Interaction between visible and invisible sectors in our Universe always brings us fruitful insights. We will meet further indications in this era by boosting astrophysical studies.