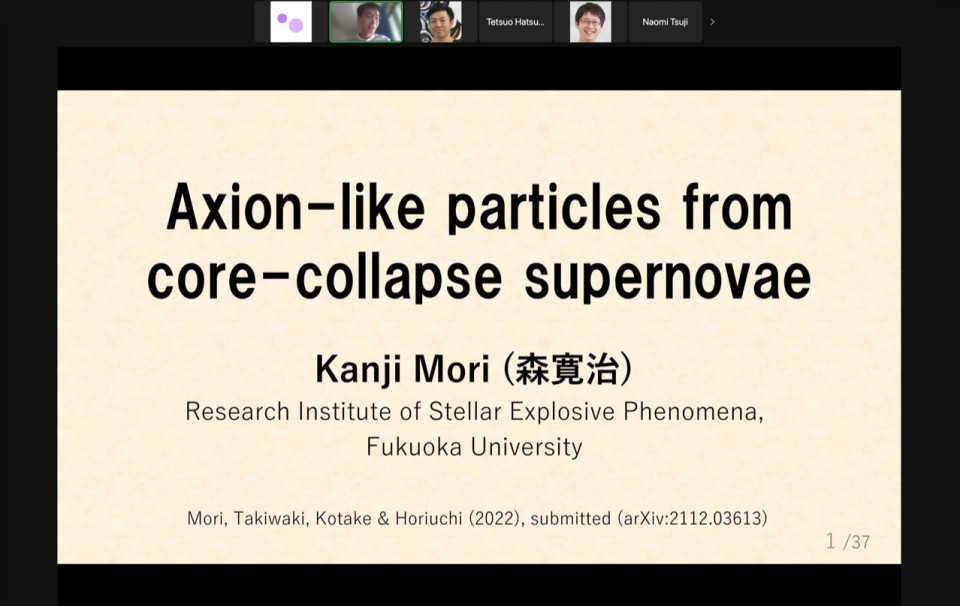 In this era of multi-messenger astronomy, axion-like particle (ALP) searches using astrophysical transients are now excitingly discussed. ALPs are an extended class of particles from QCD axion, which could solve the strong CP problem of the Standard Model, and dark matter (DM) candidates of various connections to the physics beyond the Standard Model. ALPs could interact with our sector through their coupling to the photon, electron, and/or nucleons.

The coupling of ALP to the photon is previously investigated using observations of SN 1987A, the most famous supernova explosion. MeV gamma-ray signals are expected when considering the conversion of ALP outside the stellar envelope, hence no observations of the associated gamma-ray emission to the supernova lead to the constraint on the coupling strength, for example.

Also, the existence of such coupling should modify the dynamics of supernovae. When a star explodes, the difference between the masses of the progenitor star and the resulting compact object sources the radiation, neutrino emission, and kinetic energy of the ejecta material. ALP could be an additional channel for the energy release while its absorption heats the supernova. The balance between heating and cooling controls the supernova dynamics and shock restoration, which directly relates to the electromagnetic observables. Dr. Mori has shown that the heating rate is very sensitive to the coupling strength and enhancement of the electromagnetic emission is expected in the pre-supernova stage. The signatures could also be visible in the neutrino sector after the explosion.

The results are fantastic, and there are a lot of things to do. For example, the inclusion of the ALP-nucleon coupling effects is an interesting direction to pursue. Updates in the understanding of stellar models are important as well. We should see the signature of ALP in the near future in this field!