Evolution of core-collapse supernovae to their supernova remnants

Observations of nearby supernova remnants (SNRs) could potentially provide the clues to elucidate the dynamical evolution of core-collapse supernovae (CCSNe), chemical evolution of elements in the ejecta, explosion mechanisms, properties of neutron stars and progenitor stars. In this talk, our recent three-dimensional hydrodynamical models for the evolution of CCSNe to their SNR are introduced. Additionally, an attempt to model the molecule formation in the ejecta is also mentioned.

A Tale of Two Spaces

Focusing on the supernova gravitational waves, we are considering to extract the EOS inofrmation for dense matter with asteroseismology.

The interactions between nucleons (and in general, hadrons) govern the structure of matter, such as nuclei and neutron stars. I will talk about first-principles calculations to determine the interactions from the fundamental theory of quarks and gluons, QCD.

I will make an annoucement of the forthcoming Super Smash Problems workshop on Novermber 24-26.

I propose a microscopic mechanism to reproduce the peak structure of the speed of sound of within a cold atomic model. This would be useful to understand equations of state of neutron star.

GRB afterglows and you

Localization in the directions of Schrödinger equations

For a particular class of Schrödinger equations, the solutions to the equation localize in the directions as time goes infinity. In this small talk, we review some known results on this subject.

I am a new member of RIKEN iTHEMS and working on mathematics of conformal field theory. In this talk, noninteger dimensions in tensor categories and their relationship to algebraic quantum field theory will be introduced. 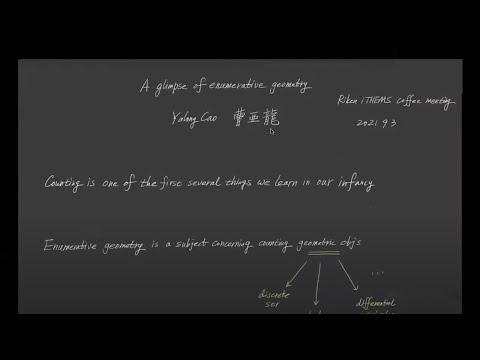 A glimpse of enumerative geometry 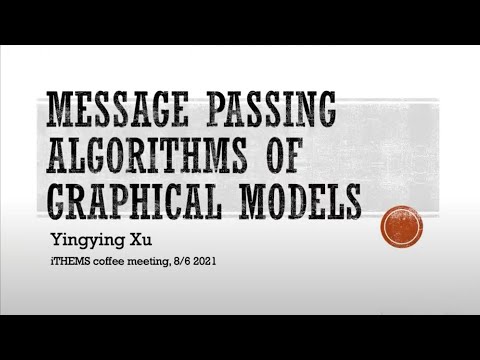 Inference problems like marginalization and maximization are NP-hard to solve exactly and approximately in a graphical model. The complexity can be reduced dramatically when the underlying factor graph has some special structure. One extreme case is that of tree factor graphs, in which marginals can be computed in a number of operations which grows linearly with number of notes. This can be done by a ‘dynamic programming’ procedure often called as message passing or belief propagation algorithms. The update rules have been discovered independently in several different contexts: statistical physics (‘Bethe-Peierls approximation’), coding theory (the ‘sum-product’ algorithm), and artificial intelligence (‘belief propagation’, BP). The time evolution of the message’s distributions is known under the name of ‘density evolution’, and the fixed-point analysis of them is done by the replica-symmetric cavity method.

Von Neumann algebras and their projections

Exact WKB and its applications to physics

I explain the exact WKB method, which is a method to solve ordinary differential equations and has been developed (mainly) in mathematics since 1980's. I also discuss its applications to physics, including nonperturbative particle production by strong fields, and mention open problems in this field.

The wave operator and the Oppenheim conjecture

I am a new member of iTHEMS and working on spectral analysis of a Lorentzian manifold in mathematics.In this talk, we will discuss the eigenvalue distribution of a wave operator on flat tori as the simplest case. Through the Oppenheim conjecture about the distribution of values at integer points of indefinite quadratic forms, I would like to explain mathematically interesting aspects of spectral analysis of a wave operator. I don't know the physical meaning of this study, but I hope this talk will be an opportunity to discuss it.

I am a new member of RIKEN iTHEMS and working on Kahler geometry in mathematics. As I cannot overview my study in this short time, I would like to explain a strange phenomenon now I am facing in Kahler geometry with a specific example. It is reminiscent of `phase transition' or `spontaneous symmetry breaking'. I hope it makes a chance of discussion with researchers in other areas.