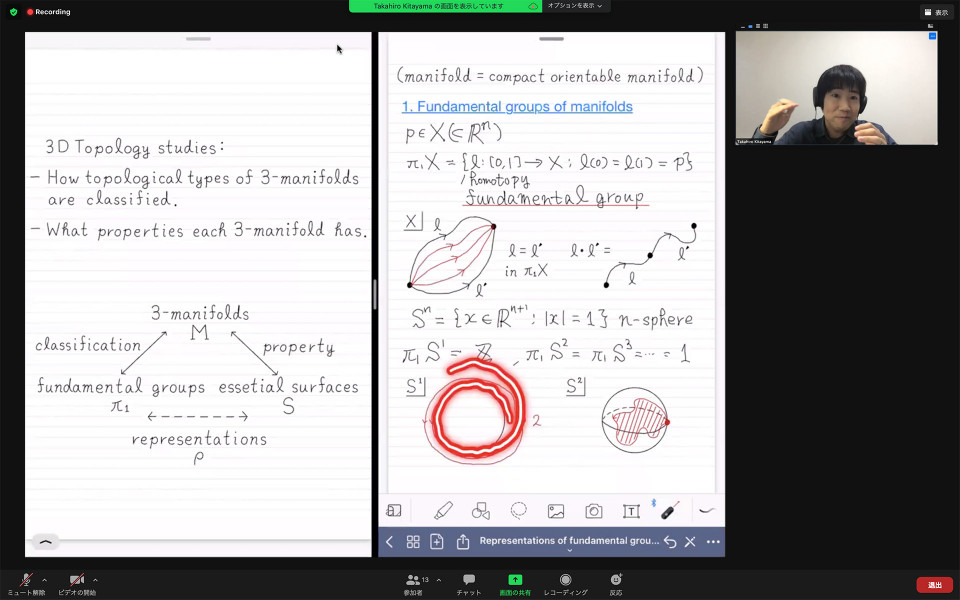 On November 16, professor Takahiro Kitayama from University of Tokyo gave a talk entitled “Representations of fundamental groups and 3-manifold topology” at the iTHEMS math seminar.

In the second part, he first mentioned Culler-Shalen, Morgan-Shalen’s theorem which says that an ideal point of the SL(2,C)-character variety of a given 3-manifold M gives an essential surface of M. Friedl, Hara, Kitayama, and Nagel developed C-S and M-S’s theory for the Lie group SL(n,C). He explained the main idea to obtain all essential surfaces from ideal points of SL(n,C)-character variety. In particular, he introduced the tautological representation depending on some affine curve of the SL(2,C)-character variety, and an action of the fundamental group on some contractible simplicial complex called the Bruhat-Tits building. Then by a standard argument of topology, he constructed some simplicial map f from the universal covering space of a given 3-manifold to the Bruhat-Tits building. By taking the inverse image of f(after ignoring trivial parts and dividing by the fundamental group of the 3-manifold), he finally constructed an essential surface. Next, he also told us about a relation between (homotopy types of) boundary loops of essential surfaces of knot complements and slopes of sides of the Newton polygon obtained from A-polynomials. He said an essential idea of the result, which can detect whether the boundary of an essential surface obtained from an ideal point is boundary parallel or not. At the end of the second talk, as the leading coefficients of torsion functions, he gave a function c_{M, ψ} on the SL(n, C)-character variety. After explaining Dunfield-Friedl-Jackson’s conjecture, he gave a partial solution of the conjecture which is related to the finiteness of c_{M, ψ} on the ideal points.