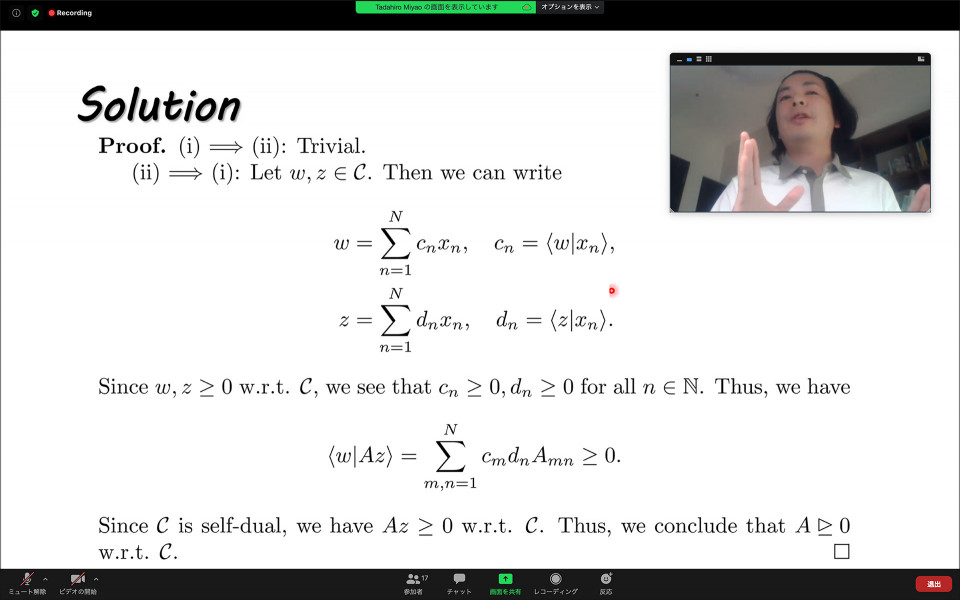 The iTHEMS Math seminar entitled "Stability of ferromagnetism in many-electron systems”, by Dr. Tadahiro Miyao, was held on 31 July.

In the first part, the speaker reviewed basic properties of electron and introduced the Hubbard model, which describes interacting electrons. In addition, he constructed a model independent framework describing stabilities of ferromagnetism in strongly correlated electron systems. Especially, he reinterpreted the famous Marshall-Lieb-Mattis theorem and Lieb’s theorem. Then he showed that Lieb’s theorem still holds true even if the electron-phonon and electron-photon interactions are taken into account. As examples, he explained the Holstein-Hubbard model and the Kondo lattice model. Finally, he also mentioned other stability classes and open problems.

In the second part, the speaker introduced order preserving operator inequalities and many mathematical tools, such as the Perron-Frobenius-Faris theorem, abstract reflection positivity, the hole-particle transformation, and so on. He also explained how these inequalities are applied to the mathematical study of ferromagnetism. Then Lieb's theorem of the Hubbard model and its stabilities were discussed in terms of the inequalities.