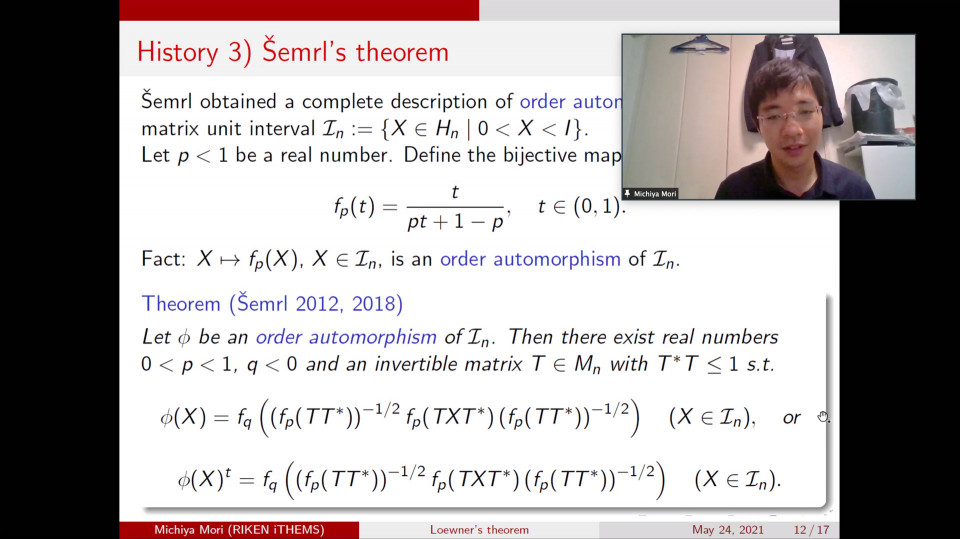 On May 24, there was an iTHEMS math seminar by Dr. Michiya Mori.

In the first part, he explained his research on Lowebner theorems. He first described the notion of abstract order. He then introduced an order on the space of the hermitian matrix. He explained Molnar's results that the order-preserving map must be affine on a particular good subset of matrices. Lastly, he explained his results with his collaborator that a map on matrix domain is an order isomorphism if and only if it has a good extension to the upper half-space.

In the second part, the speaker introduced the projective Hilbert space, the space of all quantum states, and Fubini-Study metric, an "argument" on the projective Hilbert space. He then introduced the result by Wigner that any bijective maps preserving Fubini-Study metric are unitary or anti-unitary. The speaker introduced Uhlhorn's variant of this result: if the dimension of the space is larger than three, any bijection preserving argument π/2 is unitary or anti-unitary. The speaker also explained that Gehér extended Uhlhorn's works for other cases, but there was one open case. The speaker explained his result with Gehér that the variant of the result by Uhlhorn holds for this last case.