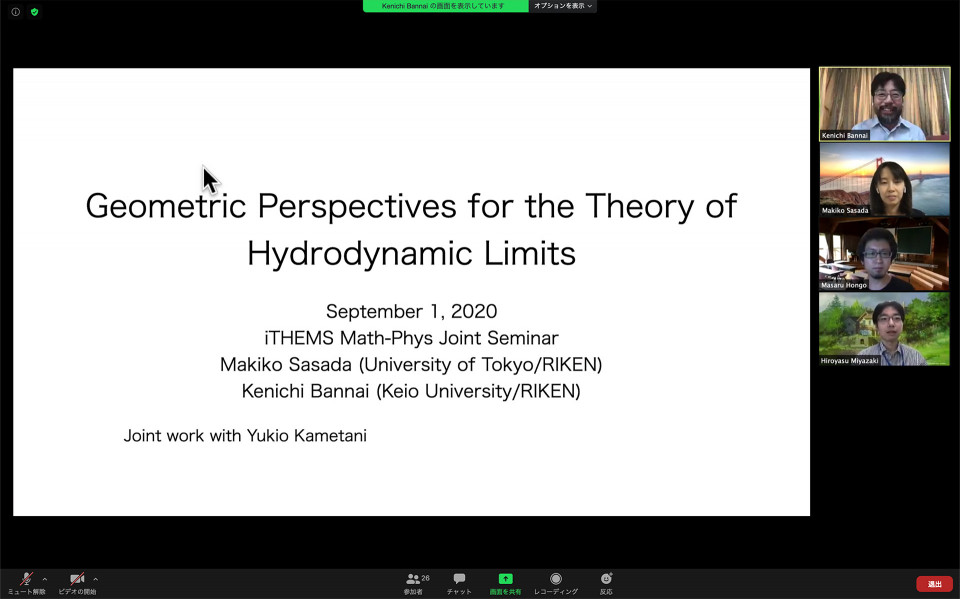 iTHEMS Math-Phys joint seminar was held on August 31 and September 1, 2020

The iTHEMS Math-Phys joint seminar was held on August 31st and September 1st, inviting Makiko Sasada from University of Tokyo and Kenichi Bannai from Keio university / RIKEN AIP. This was a series of lectures entitled “Geometric Perspective for the Theory of Hydrodynamic Limits”. They explained to us their recent joint work with Yukio Kametani on hydrodynamic limits from algebraic/geometric view point.

On Day 1, Sasada-san gave an introduction to hydrodynamic limits, and explained the motivation of the joint work and the key ideas. One of the goals of the theory of hydrodynamic limits is to derive macroscopic dynamics from microscopic evolution equations rigorously. There have been many results to this problem, but all of them depend on specific microscopic models. The long term goal of this joint work is to construct an abstract and universal theory of hydrodynamic limits. One of the most important ingredients of the theory of hydrodynamic limits is the “decomposition of closed forms”, which have been obtained by Varadhan and other people using very technical argument depending on models. One of the aims of this work is to give a more general and clear understanding of this type of decompositions. Their strategy is as follows: the microscopic data can be divided into topological (geometric) part and stochastic (analytic) part. For discrete models, the former one is modeled by a directed graph, the set of states at each vertex, and the interaction through edges. A typical analytic datum is the jump rate, i.e., the frequency of interaction. They observed that some important feature of hydrodynamic limits depends only on the geometric data, and as a consequence, they could avoid ad-hoc analytic estimations. Moreover, they obtain a version of Varadhan’s decomposition in a very general setting.

On Day 2, Bannai-san gave a precise mathematical formulation of their main results and proofs. As explained above, the geometric part of microscopic model is given by a directed graph, a pointed set of states, and a function which represents the interaction through edges. From this set of data, we can form a configuration space, each point of which corresponds to a possible state on the graph (The interaction data induce the transition structure on the configuration space). On the configuration space, they consider a special type of functions / forms called “uniformly local functions / forms”, and construct a cohomology theory (uniformly local cohomology) associated to them. Surprisingly, the uniformly local cohomology captures all conserved quantities (macroscopic observables). Moreover, from this fact, they can derive a local form version of Varadhan’s decomposition. An important ingredient of the proof is the group cohomology, which is often used in the field of number theory. They assume the existence of a free group action on the graph (which is valid in many important examples), and apply a general theory of group cohomology. It is very surprising that a fundamental result in hydrodynamic limits is derived from an abstract algebraic theory, and it will provide us a new and clear understanding of this field.

Geometric Perspective for the Theory of Hydrodynamic Limits 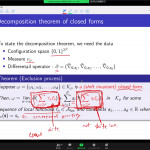 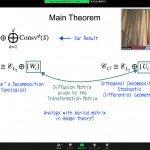