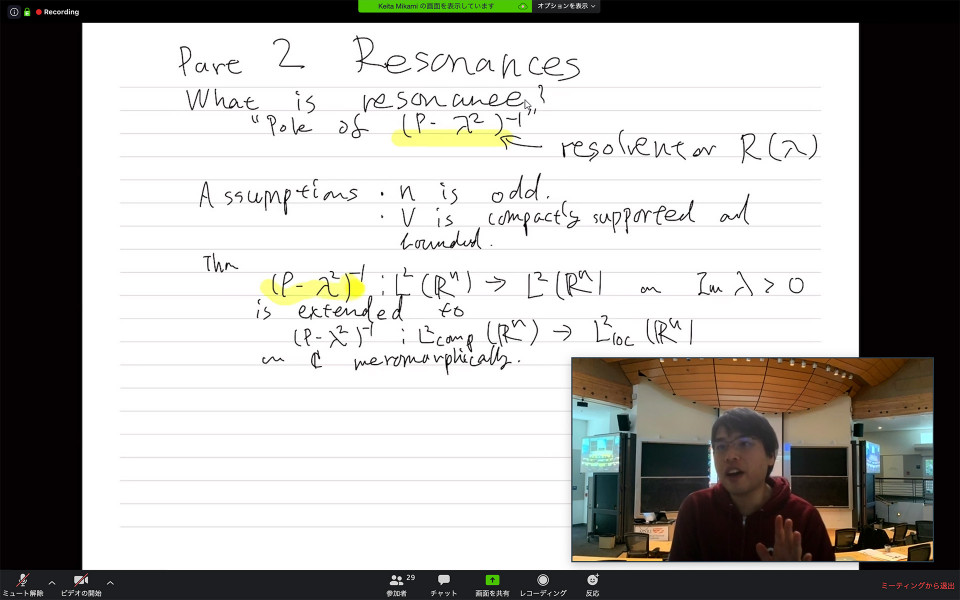 The first iTHEMS Math seminar of this academic year was held on May 1st on Zoom, inviting our colleague Keita Mikami. The title of the talk was “From Eigenvalues to Resonances”. The main topic was Resonance, which is one of the most studied objects in mathematical study of Schrödinger operators.

In the first part, the speaker briefly reviewed spectral theory and how we use it in the study of Schrödinger operators, introducing some basic notions used in the study of Schrödinger operators. Especially, he explained that spectra can be classified into eigenvalues and continuous spectra. Then he introduced scattering theory, which can be used to analyze absolutely continuous spectra. One novelty is that generalized eigenfunction has a representation formula in terms of scattering matrices.

In the second part, the speaker gave a brief introduction of resonances and its application to both mathematicians and researchers in other fields. After introducing mathematical definition of resonances, he explained its applications in the other fields. One example was the following experimental result; when one makes a wave with certain frequency in aquarium, there appears special pattern in the distribution of speed. This phenomena can be explained mathematically by considering resonance of pseudodifferential operator on torus.

From Eigenvalues to Resonances