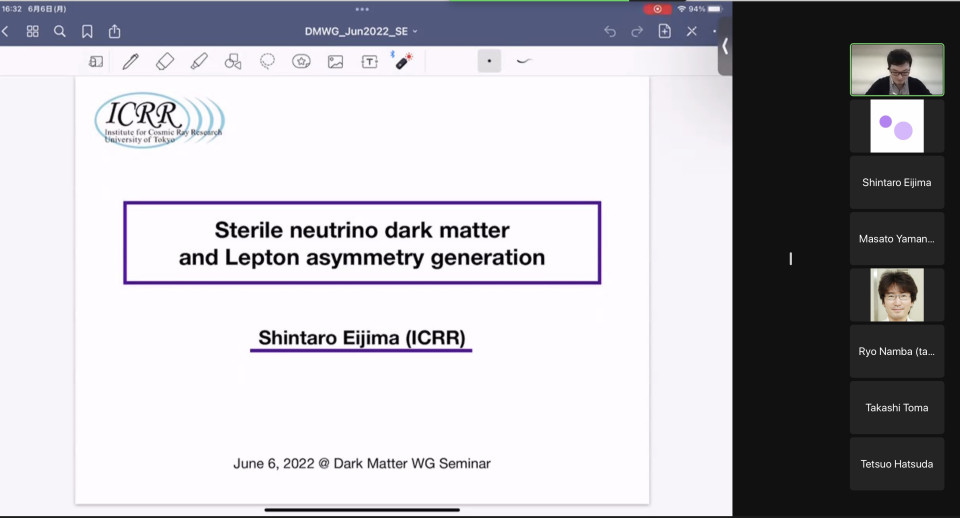 Dark matter (DM) is one important ingredient of our Universe of which existence indicates the theory beyond the Standard Model. It is not the unique motivation to extend the Standard Model describing the visible world. For example, we need to explain the origin of the tiny neutrino mass and the matter-antimatter asymmetry. The introduction of sterile neutrinos could solve these problems simultaneously.

Sterile neutrinos are new species of neutrinos which communicate with the Standard Model neutrino (active neutrinos) through mixing. Unfortunately, the possibility of explaining the whole of DM with the sterile neutrinos is already excluded from observations of X-ray emission, neutrino beam experiments, and cosmological requirements. However, it is still a viable candidate when we consider the production mechanism carefully. Furthermore, some of such scenarios expect large lepton asymmetries resulting in the matter-antimatter asymmetry. The sphaleron process takes an important role in such scenarios and it is related to the electroweak phase transition in the early Universe. The process of fixing the lepton asymmetry is interesting: sterile neutrinos first freeze-in, then freeze-out, and decay.

Quantitative prediction of such processes requires sophisticated calculations. Dr. Eijima has shown the latest results in this talk, with the comments that the bottleneck to proceed is the computational costs. The methodology is already well-developed. We will see indicative predictions in the near future! Neutrino physics will open new windows for our Universe!