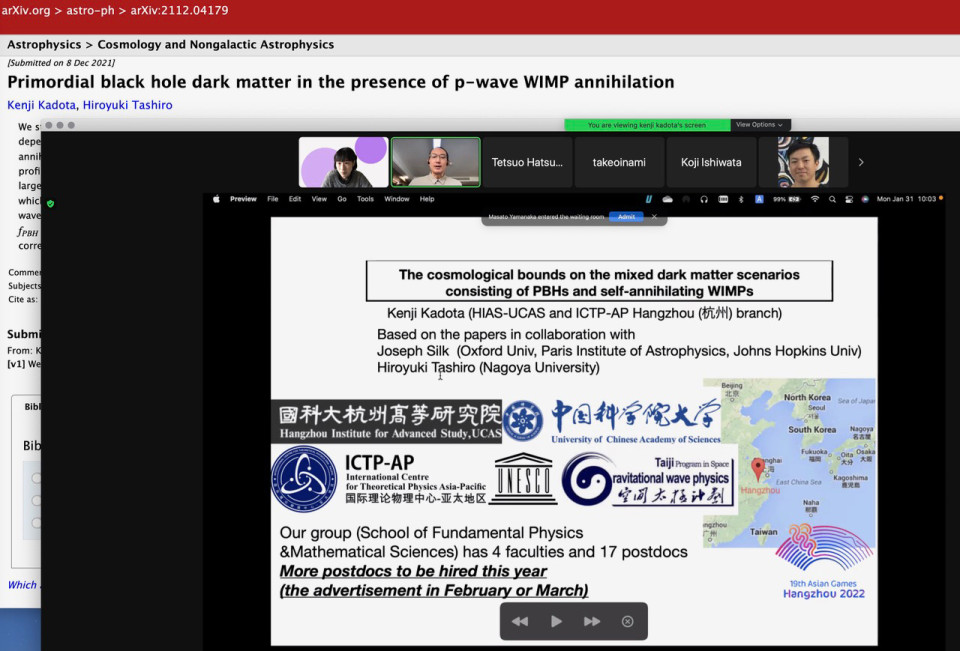 Weakly Interacting Massive Particles (WIMPs) have long been a leading candidate of dark matter(DM). However, no signatures are found in any kinds of experiments. Investigation of the alternatives is now rapidly growing. Primordial black holes (PBHs), which are formed in the early Universe and source the gravitational potential for baryonic components to evolve, are being widely discussed and searched now.

Recent progress of the gravitational, as well as electromagnetic, observations of the Universe already excludes a large portion of the parameter space of PBH as DM. So if it contributes to DM, it is natural to also consider contributions from other components such as WIMPs. In such a situation, PBHs are dressed with WIMP halos. Then WIMP annihilation proceeds in the vicinity of the central PBH and a cored structure is expected depending on the annihilation rate. This dependence of the core structure on the annihilation rate leads to a tricky behavior in the constraints for PBH-WIMP mixed scenarios.

Also, when PBHs are abundantly formed, we cannot neglect their clustering effects on the constraints obtained in the observable Universe because the dressed PBH with WIMP indicates the clustering of WIMP halos in host galaxies. In this case, the boost factor, which appears naturally in the scenario of pure WIMP DM models, needs to be evaluated in such a way that regarding the clustering of PBHs.

Those interesting phenomena are only a part of examples that we can expect in the PBH-WIMP mixed scenario for DM. Varieties of possibilities are waiting for our investigations. Discussions are blooming now!