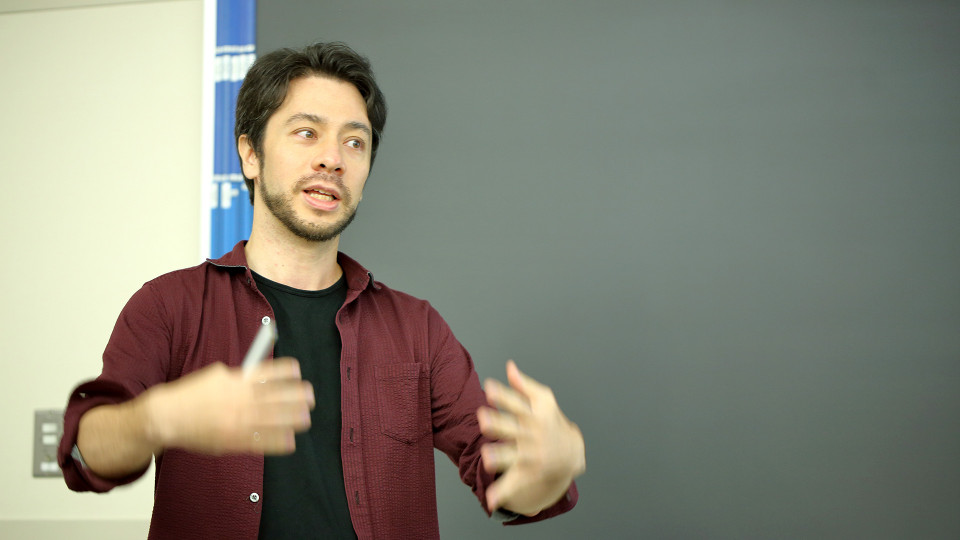 Using genomic information to understand the evolution of species 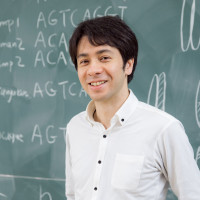 Many people think of experiments when they hear the words “biological research.” However, Jeffrey Fawcett researches the evolution of species by analyzing genetic information using computers. Below, we will introduce some of his theoretical research.

Affiliation and position are as of the interview date: August 2019
(Written and Photographed by Yoshitaka Arafune, science writer)

There are said to be 1.75 million species on the earth. However, these are only the species we know now. If you consider species we may not have yet discovered, the whole picture of life on earth is still unclear. Given the diversity of life on Earth, finding a common feature across all living beings may seem difficult. However, there is one: Every living being has a blueprint and is constructed based on the genetic information contained within that blueprint.

Genetic information is stored within a huge molecule called deoxyribonucleic acid (DNA), and is determined by the sequence of four types of bases, adenine (A), guanine (G), cytosine (C), and thymine (T). For instance, humans have two sets of genetic information, and each set consists of 3 billion bases. These bases are arranged in a specific sequence—in other words, our genetic information is written in our DNA using the four letters, A, G, C, and T, in a set order. Jeffrey Fawcett is trying to understand the process of evolution by deciphering this genetic information and understanding how the genomes have evolved.

“The sequence of A, G, C, and T that determines the genetic information is not random, but varies from species to species. I am interested in the principles that govern how the different letters are ordered and the processes creating the differences between species,” says Jeffrey. When he was in his fourth year of university, he belonged to a laboratory studying the domestication of cultivated plants. Cultivated plants refers to vegetables and grains that are grown and eaten by humans. These plants that we use on a daily basis are the results of humans modifying plants that originally existed in the wild according to our preferences.

Finding principles that apply to all species

Current theory holds that the birth of life on the earth occurred around 4 billion years ago. When we compare the genomes of various species, the more closely related the species are, the more similar their genomes are. In other words, by comparing the genomes of many species, we can elucidate the process of evolution.

Jeffrey is studying the genomes of a wide range of species from animals, plants, and yeast—not in a laboratory, but by using a computer. By analyzing the genomic data of various species using computers, he explores the evolution of these species. People may find this strange if their idea of a biologist is someone doing experiments with pipettes and flasks.

Jeffrey says, “I'm not that interested in phenomena that occur only in specific species. I'm interested in discovering general principles that apply to all species…. In my research, I don't use mathematical formulas a lot, and since I studied in departments related to biology, I didn’t have much awareness of mathematics and theory. But looking back after joining iTHEMS, I feel that I had more contact with mathematics and theory than I originally thought.”

Currently, one of the topics Jeffrey is working on is to clarify the evolutionary process of the gene regulatory network in yeast. Living organisms produce proteins based on the genomic information in the cells. This is called gene expression. Some of those proteins turn the switches that express other genes on and off. In other words, the production of one protein regulates the production of another protein, which in turn affects the expression of other genes. This relationship forms what is called the gene regulatory network.

Because yeast has only a small number of genes, we know not only its genome sequence, but also a lot about its gene regulatory network. Jeffrey is working with fellow iTHEMS scientists Atsushi Mochizuki and Takashi Okada to clarify how the yeast gene regulatory network has been formed. “In the yeast genome, there is evidence suggesting that all genes got doubled in the past,” says Jeffrey. “Many of those genes have since been lost, and the network changed even more before reaching the current number of genes. I would like to clarify this process using theoretical approaches such as computer simulations.”

Once, we thought that we could understand any living being if we knew all of its genomic information—but even with this knowledge, many questions still remain. Jeffrey wants to understand the principles of life by analyzing not only genomic information but also other information that has not yet been used, such as gene regulatory networks. Through such research, he is tackling the fundamental question of what life is.