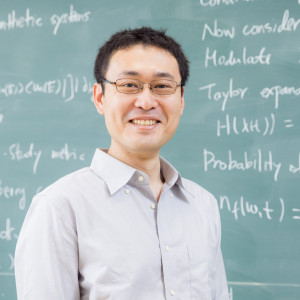 The feature article describes his research on synthetic dimensions. Although we live in a three-dimensional space, scientists can now “artificially” create and study the equivalent of dimensions, which is different from ordinary ones.

Dr. Ozawa uses “spin” of an atom as an example of a synthetic dimension. By using spin degrees of freedom as an additional dimension, it is possible to study higher dimensional physical phenomena, such as the four-dimensional quantum Hall effect.

The article was published for the general public focusing on cutting-edge research on higher dimensions, also discussing their relations to science-fiction like parallel universe. The article contains an easy-to-follow description of the new idea of synthetic dimensions, which is accessible to general readers. We expect that the studies on synthetic dimensions to have impacts in a variety of fields, ranging from condensed matter physics to high-energy physics. 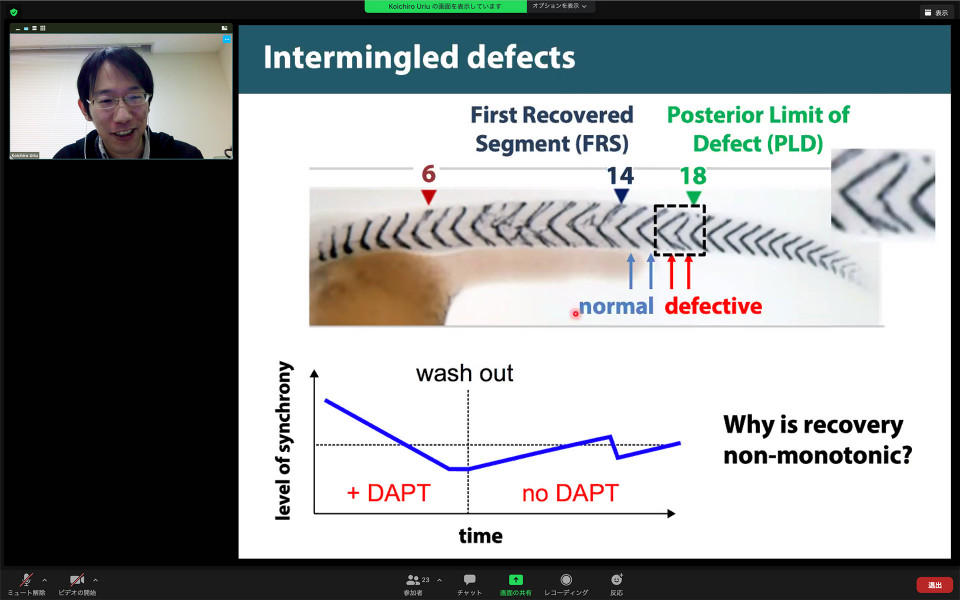 On January 7th, Dr. Koichiro Uriu gave a talk on one of the most important pattern formation in our body. Koichiro was an active member of iTHES, and is currently an assistant professor at Kanazawa Univ. Rhythmic (ON and OFF) and also spatial gene activity pattern, termed the segmentation clock underlies our body axis segmentation (“Taisetsu" in Japanese). Thus, robust gene activity oscillation propagates from the backward to the forward domain by which the segment is formed sequentially. In the seminar, Koichiro discussed the recovery processes of the segment formation after the removal of the drug which blocks oscillator coupling in a fish, called zebrafish. Curiously, experiments show that intermingled segments can occur in the body of the fish especially when the drug is removed at early stage. To understand the pattern recovery, he developed a physical model incorporating mechanics and genetic oscillations. During and after the talk, there were numerous questions from the audience because his talk was very interesting and also very clear. Thank you and see you, Koichiro!

From local resynchronization to global pattern recovery in the zebrafish segmentation clock
January 7 at 10:00 - 11:00, 2021 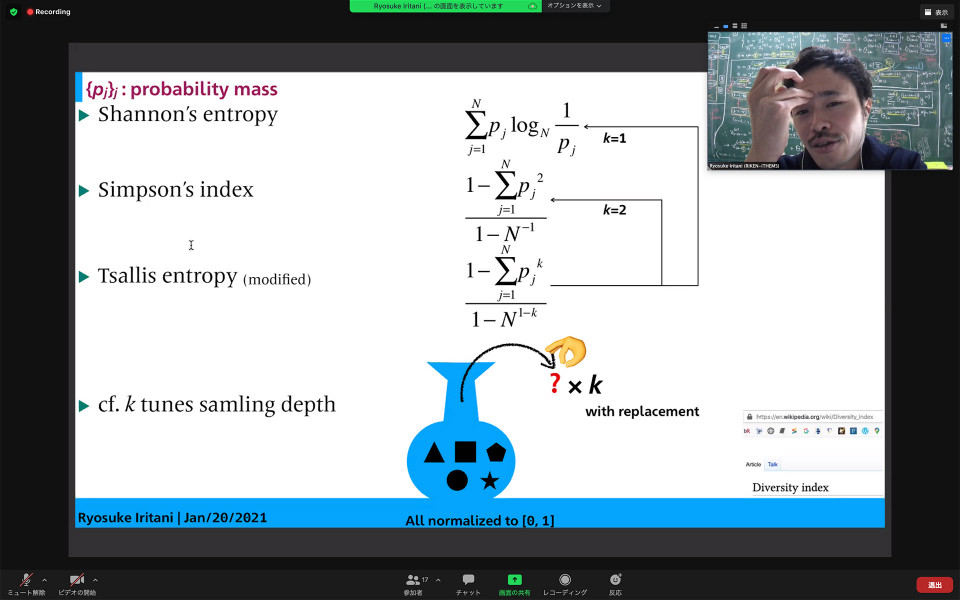 On January 20th, Dr. Ryosuke Iritani gave us a talk about his motivation to work with information theory. He first formulated the dynamics of species-site data in ecology as a Markov model. By reducing the model to a simpler one in an elegant way, he analytically obtained the evolution of the proportion of species. In addition, he discussed certain entropies that characterize the diversity of species and showed us the unique dynamics of the entropy in his model. His talk was clear as he explained mathematical concepts by using simple examples and illustrations, and there were questions and comments from several viewpoints. We are thankful to Ryosuke for the exciting talk! 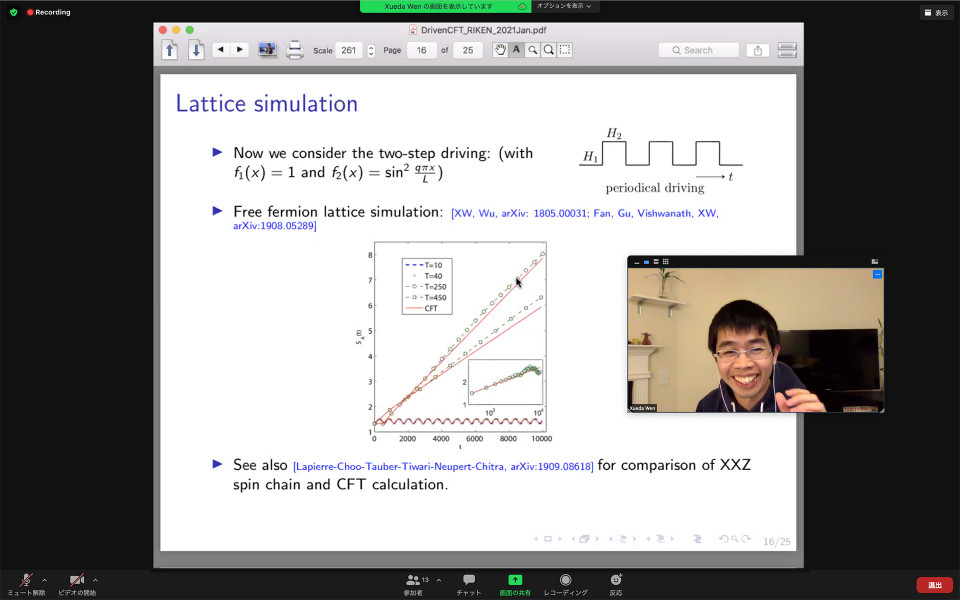 We are happy to invite Dr. Xueda Wen from Harvard University to give a talk on January 18th. This talk is the first seminar of the quantum matter study group. The topic is time-dependent driven quantum critical systems in (1+1) dimensions, which connects condensed matter physics and high energy physics. Dr. Wen started with two different free-fermion lattice Hamiltonians. The system is driven periodically and alternatively with these two Hamiltonians. Interestingly, this driven system leads to two distinct two phases. This straightforward introduction smoothly brought us to the study of time-dependent driven conformal field theories. The driven CFTs show that the periodical driving systems can possess heating and non-heating phases, and the phase transition boundary separates these two phases. Dr. Wen further talked about the generalization of driving CFTs and several unsolved problems.

This talk is informative as well as interactive. Drs. Tada, Hongo, and Takasan asked several key questions, and Dr. Wen answered those questions clearly and informatively. We thank Dr. Wen for the great talk.

Many body problems from quarks to stellar evolutions

Recently, the anomalous transport phenomena of relativistic fermions associated with chirality and spin induced by external fields have been greatly explored in different areas of physics. Notably, such phenomena are in connection to various quantum effects such as quantum anomalies and spin-orbit interaction. The quark gluon plasmas produced from relativistic heavy ion collisions (HIC) and the core-collapse supernovae (CCSN) are both the systems in extreme conditions with high temperature or density and the presence of strong magnetic and vortical fields. Meanwhile, the abundance of light quarks and neutrinos as relativistic fermions created therein accordingly makes these two systems ideal test grounds for studying such exotic transport phenomena. Inversely, the anomalous transport may also give rise to unexpected impacts on the evolution of both systems. However, to analyze such dynamical quantum effects, a novel quantum transport theory delineating the evolution of chirality imbalance and spin has to be introduced. In this talk, I will discuss recent developments and applications of the quantum kinetic theory for chiral and spin transport in the context of HIC and CCSN.