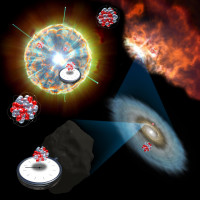 A joint research group consisting of Masaomi Ono, a Research Scientist at RIKEN, and others has theoretically predicted that an unstable isotope Technetium-98 (98Tc) could be synthesized by neutrinos emitted from supernova explosions.
Supernovae are important events in the evolution of stars and galaxies, but the details of how the explosions occur are still unknown. This research found a method to investigate the role of electron anti-neutrinos in supernovae. By measuring the amount of 98Ru (an isotope of Ruthenium) in meteorites, it should be possible to estimate how much of its progenitor 98Tc was present in the material at the time when the Solar System formed. The amount of 98Tc in turn is sensitive to the characteristics, such as temperature, of electron anti-neutrinos in the supernova process; as well as to how much time passed between the supernova and the formation of the Solar System.
(This work appeared in Physical Review Letters on Sept. 4, 2018.)

Caption: We can estimate the age of heavy elements in the primordial Solar System by measuring the traces left in meteorites by specific radioactive nuclei synthesized in certain types of supernovae.
Credit: NAOJ (National Astronomical Observatory of Japan) 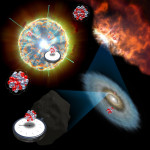 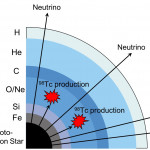 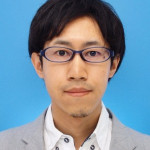