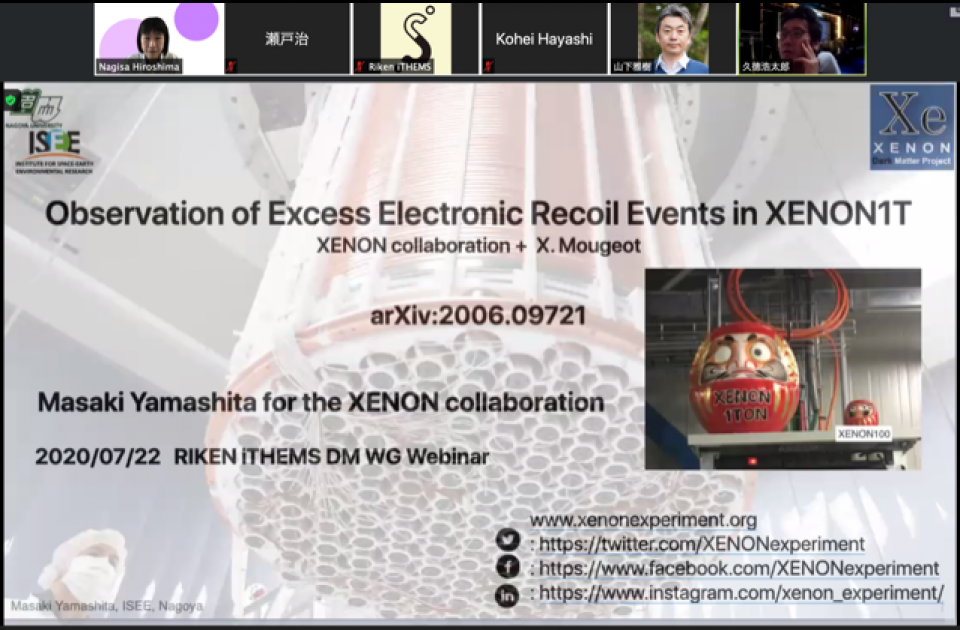 Special DMWG seminar : The latest results from the XENON1T experiment

XENON1T collaboration has reported interesting results in June, which could be the signature of the physics beyond the standard model. We held a special DMWG seminar on July 22, inviting Prof. Yamashita, who is a specialist in the XENON1T data analysis, from Nagoya University. Many people from various research fields have registered and participated in this online seminar. The number of registrants is more than 180 while the participants than 100. We first would like to apologize to our guests, especially to whom could not attend the seminar although they have registered due to our trouble with the webinar system.

XENON1T is an experiment aiming to detect the scattering between dark matter (DM) and a xenon nucleus. Xenon is one of the best targets material for WIMP (Weakly Interacting Massive Particle) because of its stability and the large atomic number. By setting the detector deep underground, the cosmic-ray scattering event, which is the main source of the background, is efficiently removed. The original experiment was started in 2005 (XENON10) and after several upgrades, XENON1T has completed its first observing run in 2018.

The signature of the so-called nuclear recoil event is searched to detect WIMP. There is another type of event referred to as the electronic recoil event, which is also useful to detect other DM signatures, and this seminar focuses on such a kind of event. The target region of the DM parameter space is different between these two event types. The 285 electronic recoil events over the expected 217-247 from the background are observed in the recoil energy range of 1-7keV during the 1st observing run of the XENON1T experiment.

In this talk, Prof. Yamashita has explained the details of the analysis and the possible interpretation of the signature. Starting from the introductions about the possible background considered in the traditional analysis, the statistical treatments, and also the model fitting results are provided. There are several possibilities for explaining the excess: (i) tritium background, (ii) solar axion, (iii) anomalous neutrino magnetic moment, and (iv) bosonic DM. If the excess is explained by tritium (i), it means that we have detected the first tritium background events while others indicate the detection of the signatures of the new physics. Solar axion (ii) could fit the recoil spectrum beautifully, however, there may not be consistent with the results from astrophysical observations. The neutrino scenario (iii) is another possibility with less significance, and the significance of the bosonic DM scenario (iv) could not over the 3.0 sigma.

The excess itself is convincing while it is difficult to conclude its origin. Abobe-mentioned possibilities are planned to be tested with further upgrades of the XENON1T experiment, XENONnT. We should be excited about the results in the near future. Stay tuned!