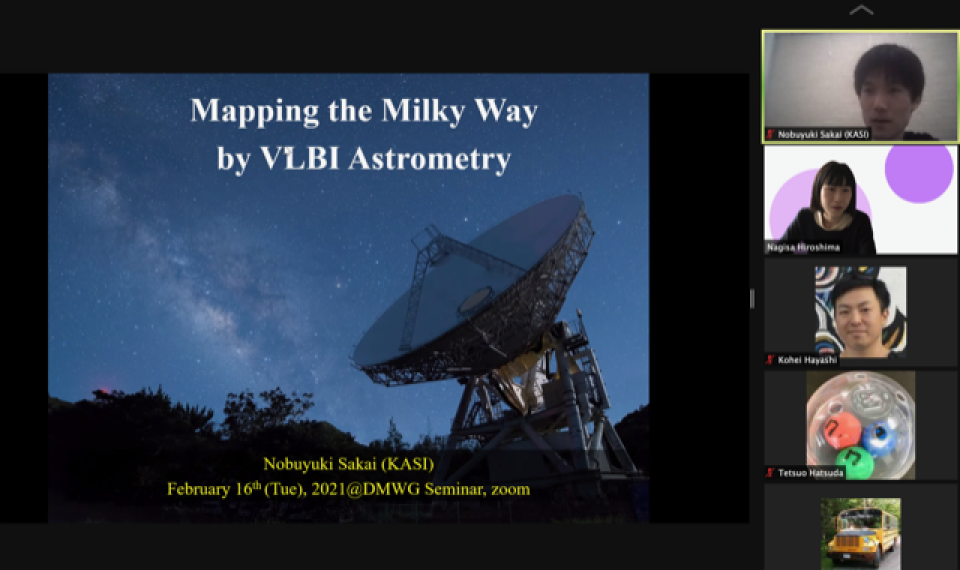 The precise understanding of the local DM density, as well as its velocity distribution, is critical for dark matter (DM) search, especially for direct detection experiments. We need information about the global structure such as the position and rotation velocity of the Solar system when evaluating these quantities. Astrometry, which is a technique to measure the time dependence of the position of stars, powerfully probes the 3D gravitational structure of our Galaxy.

There are two types of astrometric observations: the first one is based on optical (and infrared) photometry. The parallax is obtained by comparing two snapshots of the sky between two epochs. The Gaia mission is the representative for this kind of observation. Gaia reveals the structure of our Galaxy up to ~5kpc from the Sun. The mission is planned to continue the observation to extend our reach to ~10kpc, meaning that it should cover the Galactic Center in the near future. The second one is the VLBI observation. VLBI is an abbreviation of the very-long baseline interferometry. The spatial resolution of milli-arcsecond is achieved with VLBI techniques. However, the sensitivity is limited and long-lasting observations are required in general. In this sense, VLBI and optical photometry are complemental.

One important discovery for DM search from VLBI astrometry is reported in this seminar. The VLBI observation of the Galactic disk region reveals the position of the Sun is closer to the Galactic Center compared to the conventional values used for a long time, and the rotation velocity is higher. This means that our Galaxy is heavier, i.e. contains much DM, and the relative velocity between DM particle and us is different, compared with the previous estimates. Also, the disk region does not reach the equilibrium yet. These facts should change the picture of our Galactic DM structure.

New facilities for astrometric observations are now being planned and constructed. There are diverse possibilities for the synergy between DM search. The astrometry should give important indications such as the merger history of DM halo, dynamical interaction between the Milky Way and its satellite galaxies, the global structure of the Milky Way, and far more. We should stay tuned!