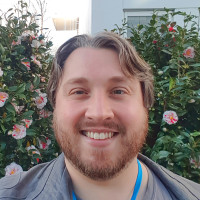 My name is Matthias Berwein and I'm from Germany. I did my undergraduate studies in physics at TU Munich from 2006 to 2011, followed by a PhD 2012-2016 also at TU Munich in the group of Nora Brambilla. Then I came to Japan for my first postdoc at Tohoku University in Sendai under a JSPS fellowship with Yukinari Sumino. Since 2018 I've been at RIKEN, first in the SPDR program at Quantum Hadron Physics Lab, and from 2021 in iTHEMS.

The focus of my research lies in theoretical studies of the strong interactions through the theory of quantum chromodynamics and with a special emphasis on heavy quarks. I have worked on several projects on the static quark potential, heavy quarkonium hybrids, and heavy quarks at finite temperature, using perturbative calculations and effective theory methods. Currently, I'm studying properties of the energy-momentum tensor in these environments. I look forward to many fruitful interactions with fellow researchers here at iTHEMS.